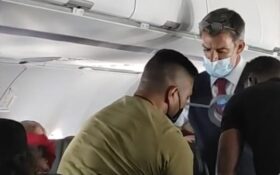 On Aug. 11, a 13-year-old passenger was duct-taped to his seat after attempting to kick out a window, recently released video shows.

He was on an American Airlines flight when he started a physical fight with his own mother, according to a report from CBS Los Angeles.

The teenager had to be restrained by both the flight attendants and his fellow passengers after trying to kick out a window on the plane.

A video obtained by The Daily Caller shows the teenager being held to his seat by a group of passengers while a flight attendant carries a roll of duct tape.

According to CBS, the plane was originally planned to fly from Los Angeles to Maui, but it was rerouted to Honolulu, Hawaii, where the minor was taken into custody.

No one was injured during the outburst, CBS reported.

This is not the first airline incident to require duct tape.

On Aug. 3, a 22-year-old passenger from Ohio was bound to his airplane seat with duct tape. He was restrained after ordering three drinks, taking off his shirt, groping two flight attendants, and punching a third.

Like the 13-year-old, he was restrained by the other passengers.

These two incidents come during a spike in passenger non-compliance on airplanes.

The Federal Aviation Administration (FAA) recorded 3,810 incidents of unruly passengers from January 1 to August 8, 2021. That’s an average of over 100 per week.

So far this year, the FAA has launched 655 investigations into reports of unruly passengers.

Earlier this year, the FAA enacted a zero-tolerance policy. It allows for harsher penalties on disruptive passengers.

He discussed the new penalties, which include “heavy fines and jail time.”

Dickson continued, “Flying is the safest mode of transportation, and we intend to keep it that way.”