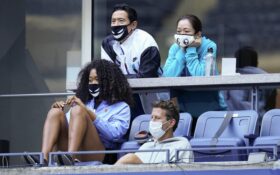 The see-and-be-seen scene in the U.S. Open’s Arthur Ashe Stadium corporate suites is different this year: The usual cast of celebrities, socialites and sponsors — banned, along with all spectators, because of the pandemic — has been replaced by the stars of the sport themselves.

The 64 seeded players in the women’s and men’s singles draws, along with past champions Venus Williams, Kim Clijsters and Andy Murray, were assigned those special boxes to use as personal lounges while they remain in the Grand Slam tournament.

The suites have outdoor seats where players hang out to take in the action, including Williams’ sister, Serena, who brought her dog along to what can have the feel of balconies in the atrium of an apartment complex.

“It’s nice to just be able to watch a match and not be disturbed, not disturbing anyone else,” said 2017 U.S. Open champion Sloane Stephens, who is seeded 26th. “It’s actually a very cool vibe to be a tennis player and also be, like, a fan and watch.”

So there Stephens was Wednesday, eating edamame out of a paper bowl during 17-time Grand Slam champion Novak Djokovic’s second-round victory.

A shirtless Dominic Thiem showed up, too, keeping an eye on the guy who beat him in this year’s Australian Open final.

“They’re watching you, right? They’re there,” Djokovic said. “You can sense that there is also that kind of additional pressure to perform well in front of them.

On Tuesday, 2012 Open champ Murray’s first match at a major championship in nearly 20 months drew all sorts of attention as it stretched to five sets across more than 4½ hours.

Two-time major champion Garbiñe Muguruza was there, using a fork and knife to eat lunch; 10th-seeded Andrey Rublev’s utensils of choice were chopsticks.

“I wanted to see at least a couple of games,” Rublev said, “because I knew it was going to be a really high level of smart rallies.”

Murray noticed the folks there in the otherwise nearly deserted, nearly silent, arena, which can accommodate an audience of more than 23,000.

“Just sort of having some people around in a very empty stadium — the biggest tennis stadium that we play in — it certainly helped me, for sure,” said Murray, who checked out some of fellow Briton Kyle Edmund’s loss to Djokovic.

“For me, it’s not always, like, what the person is saying, but often when I’m playing, when there’s big crowds and stuff, I often engage and make eye contact with people in the crowd,” Murray said. “Gives me some energy and stuff. That helps.”

Stefanos Tsitsipas, a 22-year-old from Greece who is seeded No. 4, noted that he never could have afforded these seats in the past. He also kiddingly complained about the sightlines from his corner box — “Not the best view” — and noted: “I wish they had a picture of me in my suite, but they only have pictures of Serena, Rafa and Roger. I’ll have to wait for that.”

Clijsters personalize her porch a bit, setting up a basketball hoop so players practicing on Ashe could aim a tennis ball for the rim. Lettering on her suite’s window teases, a la at a carnival: “Win A Prize.”

In the words of 2017 runner-up Madison Keys, they’re “a massive privilege.”

Players have the run of the place when they’re not competing or training. No fighting their way through hoi polloi around the grounds. Leisure activities are set up on the plaza outside Ashe — billiards table, putting green, giant chess set and more.

A bit of the feel of an exclusive club, and the suites add to the luxury for those in position to merit one. They’re also valuable with locker-room time and space limited in the name of social distancing.

“Having a place that I can just go and there’s no one else and I can just sit there by myself is really nice,” said Keys, who’s seeded No. 7. “I spend most of my time on-site there. I eat all my meals in there. I do a lot of my warmup in there. I stretch in there. I pretty much live in my suite. … I love that I can kind of peek out and see what’s going on.”

Players who lose a match also lose their suite after that round ends (although anyone also entered in doubles gets to hang onto the spot until they’re also eliminated in that event).

Those areas are cleaned and disinfected, then awarded to the highest-ranked player — based on the entry list, not the current WTA and ATP lists — remaining in the departing player’s event. So aside from all of the millions of dollars on offer, and the valuable ranking points, there’s also some extra incentive for unseeded players.

Caroline Garcia, for example, effectively cleared out a space for herself by eliminating No. 1 seed Karolina Pliskova 6-1, 7-6 (2) Wednesday.

So the 50th-ranked Garcia was cleared to be movin’ on up to the suite side Thursday, as were Victoria Azarenka, Iga Swiatek, Ugo Humbert and John Millman.

Still, Pegula, whose parents own the NFL’s Buffalo Bills and NHL’s Buffalo Sabres, could earn herself a turn in the fancy digs if she beats No. 8 seed Petra Kvitova, a two-time Wimbledon champion, when they play Friday.

“It’s not that big of a deal to me. But it is nice thought,” Pegula said. “That would be a nice perk.”