A buttload of money: trio steals $450k worth of colonoscopy tools - The Horn News 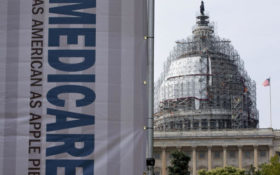 Police say two men and a woman broke into a Philadelphia-area hospital and stole nearly a half-million dollars’ worth of colonoscopy instruments.

Authorities say the trio had access to a secured area of Lankenau Medical Center in Wynnewood. The people walked out of the hospital with several colonoscopes with a value of $450,000.

Police told TV station WCAU the colonoscopes may be sold on the black market.

Lower Merion Police are still searching for the suspects in Saturday morning’s theft.

Surveillance video shows the three driving up in a Jeep Wrangler and one man and one woman exit the vehicle. At some point, the third suspect joins them. Video also shows all three of them leaving with full backpacks.