Record-setting video racks up a billion views - The Horn News 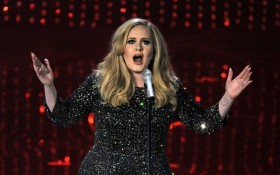 Sorry, Psy. Adele has outpaced the South Korean pop star on the race to 1 billion views on YouTube.

The streaming service announced Thursday that her music video for “Hello” greeted its 1 billionth view in 87 days, breaking the 158-day record held by Psy’s “Gangnam Style.”

“If anyone deserves it, it’s Adele and that song,” said Susanne Daniels, the head of original programming at YouTube.

There are several music videos on the cusp of reaching 1 billion views, including Shakira’s “Waka Waka,” Ed Sheeran’s “Thinking Out Loud” and Ellie Goulding’s “Love Me Like You Do.”

YouTube said the feat is still rare, but newer music videos such as Katy Perry’s “Roar” and Taylor Swift’s “Blank Space” achieved it at a faster pace than older ones like Justin Bieber’s “Baby” and Eminem’s “Love The Way You Lie.”

You can watch the video here: