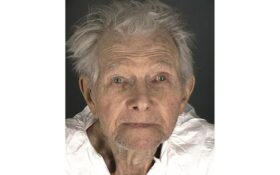 A 95-year-old Colorado man accused of shooting and killing a maintenance worker at his assisted living center told police he was tired of staffers stealing money from him and decided to shoot the man to make the thefts stop, according to a court document released Thursday.

Okey Payne was arrested Wednesday in his room at Legacy Assisted Living in Lafayette, 22 miles (35 kilometers) north of Denver. Investigators say he shot Ricardo Medina-Rojas after confronting him about $200 that he said was missing from his wallet.

Payne said Medina-Rojas “mumbled something” before he shot him once in the head. Medina-Rojas later died at a hospital.

An arrest affidavit from police says Payne said he confronted another man about the money that he noticed was missing from his wallet on Monday but that man, whose name was redacted from the report, did not reply to him.

On Wednesday, Payne told investigators that he was sitting in the center’s lobby watching people and thinking about how to get attention and stop the thefts when he saw Medina-Rojas arriving for work and decided he would shoot him.

He also told investigators that he should have waited to talk to another man, whose name was redacted, and shot him instead. Still, Payne said he is glad the “thievery” will stop.

“Okey stated it was too bad he had to ‘waste’ him (Ricardo), but he’s hoping if something good comes from all this is that the stealing will stop,” the report said.

Artery-Widening Discovered In The Netherlands? [Sponsored]

Payne was being held on suspicion of first-degree murder as well as menacing because he’s accused of waving his handgun at two people who tried to help the victim. It’s not known if he has a lawyer yet. He is due to make his first court appearance Friday.

According to the report, Payne used a .45 caliber Automatic Colt Pistol that his father had used during World War I. He told investigators that center staff had taken two other firearms he owned and put them in an off-site storage unit.

Police said Payne was clear-headed and lucid while being interviewed. However, it also said Payne told investigators that he suspected staffers were trying to kill him and take his money, that he was being drugged by staffers because of needle marks he found in his big toe and that he suspected his ex-wife was working with someone else to steal money from him.