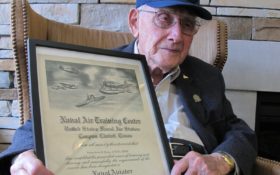 A New Jersey township high school has surprised a 92-year-old World War II veteran with the high school diploma he would have earned if he hadn’t dropped out to join the Army.

Vito Trause was presented with his “East Rutherford High School” diploma Wednesday, in a nod to Becton Regional High School’s name during Trause’s era. The Record reports he was escorted by active-duty commanders and sergeants from the military.

Trause dropped out of high school 75 years ago to join the Army.

Trause forged a connection with the Becton Class of 2018 when he came to speak to the seniors on June 11.

Trause joked he didn’t have “much time left, so it’s good to graduate now.”