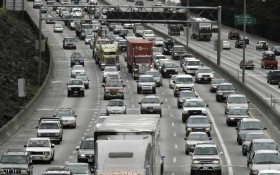 A Utah couple welcomed their fourth child into the world on the side of Interstate 15, coached through delivery problems by a 911 operator.

Dispatcher William Kalaher was new to the job and had only been taking solo calls for two weeks when he answered the call from the Eagle Mountain couple around 1 a.m. Friday, KUTV-TV reported.

“I mean, we joke, ‘Oh you’re going to get a pregnancy call,'” Kalaher said, “and then it actually happens. You train for it, and then here we are. I really wasn’t expecting it. But you’ve got to be ready for it. It’s 911.”

Kristin Allred gave birth to her 8.4-pound baby girl, Anne, in the family truck. She said she and her husband were about 6 miles from Intermountain Medical Center when she realized they weren’t going to make it.

“My body told me I needed to push, and here she is!” Allred said.

The baby came out with the umbilical cord wrapped around her neck. She cried and then went limp.

Kristin’s husband, Shay, had called 911. Kalaher asked if the baby was breathing — she wasn’t — and then told the Allreds what to do.

“I need you to take a string — a shoelace, possibly — and tie it tightly around the umbilical cord about 6 inches from the baby. I need you to do it now and tell me when it’s done,” Kalaher can be heard telling Shay Allred during the 911 call.

“As soon as we tilted her head back, she just gasped her first breath and it was like, ah, thank goodness,” Shay Allred said.

The couple said it was comforting having Kalaher on the phone during the birth.

“He definitely helped us stay calm in the fact of helping her breathe, because that was just terrifying,” said Kristin Allred.

Paramedics and police arrived about five minutes later. The mother and baby were admitted to the hospital Friday and released Sunday.

Kalaher said the birth was his first major call and the “best case scenario,” because the Allreds listened to him and were able to get the baby breathing.

After the call, the first thing Kalaher did was call his mom.