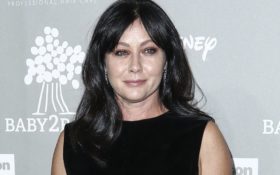 Shannen Doherty is battling a recurrence of breast cancer that has progressed to stage four, telling fans “it’s a bitter pill to swallow.”

“I definitely have days where I say, ‘Why me?’ And then I go, ‘Well, why not me? Who else? Who else besides me deserves this?’ None of us do,” Doherty told “Good Morning America” on Tuesday. “I don’t think I’ve processed it. It’s a bitter pill to swallow in a lot of ways.”

The actress from “Charmed” and “Beverly Hills, 90210” first revealed she had breast cancer in 2015 and charted her battle with the disease and its remission on social media.

She said one reason she came forward to say it has returned is because her health conditions could come out in court. The actress has sued insurance giant State Farm after her California home was damaged in a fire in 2018.

Doherty, 48, has been working on a reboot of “BH90210” and kept the diagnosis mostly secret. “People with stage four can work, too. Our life doesn’t end the minute we get that diagnosis. We still have some living to do,” she said.