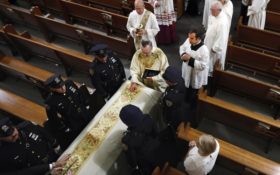 A former police detective who fought for the extension of health benefits for Sept. 11 responders was hailed as a hero Wednesday at his funeral.

“These heroes responded to calls for help. They did not hesitate; that’s who they were and still are,” Police Commissioner James O’Neill said at the funeral for Detective Luis Alvarez, 53. “He and they viewed their efforts as an obligation that they promised long ago to the people we serve.”

And for many of the mourners, the loss also was a deeply personal one.

“Before he became an American hero, he was mine,” said Alvarez’s son, David.

Alvarez died Saturday in a hospice center after a three-year battle with colorectal cancer. He attributed his illness to the three months he spent digging through rubble at the World Trade Center’s twin towers after the terrorist attack.

In June, a frail Alvarez appeared before the House Judiciary Committee with former “Daily Show” host Jon Stewart to request the extension of the Sept. 11 Victim Compensation Fund, which has been largely depleted.

“I did not want to be anywhere else but ground zero when I was there,” Alvarez said at the hearing. “Now the 9/11 illnesses have taken many of us, and we are all worried about our children, our spouses and our families and what happens if we are not here.”

When asked where he had been walking, she said, “My brother responded, ‘I was walking to find first responders to make sure they get help.’”

“How we walk with the broken speaks louder than how we sit with the greatest,” Lugo said.

Fighting for other first responders through the Victim Compensation Fund, Lugo said, became his “dying wish.”

After Alvarez and Stewart’s emotional testimony before Congress, the House Judiciary Committee voted in support of a bill that would extend funding through fiscal year 2090.

Lugo said her brother was grateful to hear of the committee’s support. The bill awaits a full House vote.

Alvarez was born in Havana and raised in the New York City borough of Queens. He served in the Marines before joining the New York Police Department in 1990 and spent time in the narcotics division and the bomb squad.

In a statement after his death, Alvarez’s family called him its “warrior” and told people to remember his words: ”‘Please take care of yourselves and each other.’”

NYPD Chief of Detectives Dermot Shea tweeted that Alvarez was “an inspiration, a warrior, a friend.”