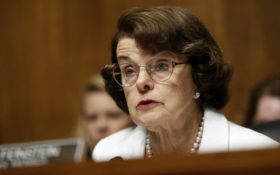 At 84, Sen. Dianne Feinstein is at an age when many Americans are deep into their retirement years. But the oldest member of the Senate announced Monday that she will seek another term with a ready retort for those who might suggest her best years are behind her.

Is it time to finally put term-limits on Congress?

The announcement that she would seek a fifth full term was expected and she has been stockpiling campaign dollars for a re-election bid. In recent months, the former San Francisco mayor has shown no signs that she was thinking about changing direction.

With seats on several of the most powerful panels on Capitol Hill — the Judiciary, Appropriations and Intelligence committees — Feinstein has been a leading Democratic “resistance” to President Donald Trump and the agenda that Americans voted for.

In a statement, she said the Trump era has seen “democracy challenged in unacceptable ways,” from the attempts to roll back national health care for millions of people to attacks on reproductive rights and efforts to slow climate change.

“I cannot and will not step away from this fight,” she said. “There’s still so much work left to be done.”

Feinstein never directly referred to her age but argued her years in the Senate, where seniority carries clout, made her an effective voice for the nation’s most populous state.

“The ability to get things done counts. And the compassion, vigor, and stamina to make a difference counts,” she added, seeming to anticipate questions about her age.

With another six-year term in Washington, Feinstein could be in the Senate into her 90s.

Questions about her age circulated in 2012, when at 78 she was easily re-elected over token Republican opposition. She had a pacemaker installed in January.

Nonetheless, she enters the race the favorite to hold the seat she first won in 1992 in the strongly Democratic state.

Her centrist credentials and lack of enthusiasm for universal health care have created friction with her party’s restless left wing. She’s had protesters outside her home, and has been criticized by some for appearing too temperate at times in remarks about Trump’s White House.

As the top Democrat on the Judiciary Committee, she has focused, often in futility, on gun control issues and immigration.