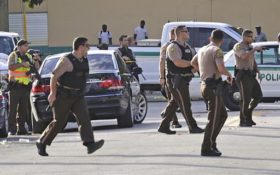 A national holiday celebrating nonviolence and Martin Luther King Jr. erupted into mayhem when eight people were shot at a park named after the slain civil rights leader.

Hundreds of people had gathered in the park after the annual MLK Day parade in the Liberty City neighborhood, and the shooting sent people running in all directions Monday afternoon. Police said they were not sure what started the shooting.

The wounded ranged in age from 11 to 30. Only one of those shot was in critical condition Monday.

Miami-Dade Police Director Juan Perez tweeted that it was a “shameful closing” to the parade.

“Certainly not what the followers of Dr. King Jr. want out of our community,” he wrote.

The parade has been a tradition since the 1970s. People gather on the streets to barbecue, listen to music and celebrate King’s life.

The shots rang out around 3:40 p.m. as bikers and ATV riders roared past in celebration. Their motto: “Bikes up, Guns down,” The Miami Herald reported.

Police evacuated and closed the park after the shootings.

Terrell Dandy, who was in the park, said it was peaceful until he heard three gunshots. Then the crowd began to stampede out of the park.

“It was good until you had these idiots out there shooting,” Dandy told the newspaper. “It was just a bunch of commotion.”