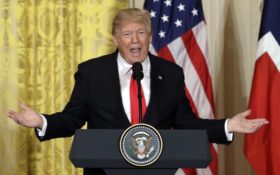 The only question we have is: Why is that number so low?

American viewers told Monmouth University that, not only are they being lied to, but they think the media’s outrageous bias is no accident.

Almost twice as many people say the networks report fake news “in order to push an agenda” – and promote the anti-Trump, pro-Obama party line – than think journalists make honest mistakes.

A huge percentage of Americans believe the mainstream media can’t be trusted to report the facts; they think reporters choose stories and angles to advance left-wing politicians.

For example, NBC News ran an article on Easter morning saying that Christianity is “used to defend white supremacy.” The evidence? A murder that took place 145 years ago.

Funny, it didn’t run a story during Ramadan saying that Islam is tied to terrorism, suicide bombers, and wife beating.

The Monmouth Poll shows how mass media hypnosis has disappeared – and been replaced by contempt.

But that contempt isn’t evenly shared between the parties. 74 percent of Democrats believe the media report the facts “fully, accurately, and fairly.” Only 19 percent of Republicans do, according to the Poynter Media Trust Survey.

But more and more Americans are siding with the Republicans.

During the Obama administration, media bias was so obvious that only six percent of Americans said they had high confidence in the news media by 2016, according to a poll commissioned by the Associated Press.

The media knows the spell they have cast over American minds for decades has been broken – and they’re losing power, influence, and money by the day.

The only thing they hate more than being irrelevant and untrustworthy is to have that pointed out.

The Big Media dinosaurs exploded in frustration last week, after a group of conservative TV stations called them on the carpet for practicing yellow journalism.

When Sinclair Broadcasting promised not to air fake news on its 173 stations, former CBS anchor Dan Rather went ballistic.

Dan called the statement pure “propaganda,” “Orwellian,” and “the means by which despots wrest power, silence dissent, (and) oppress the masses.”

Of course, Rather knows all about false news. Just before the 2004 election, Rather used forged documents to claim that former President George W. Bush skipped his National Guard duty during the Vietnam war.

What’s even more incredible is that he still brazenly stands by the Democratic hit piece, more than 11 years later. In December 2015, Rather called his own fake dossier “a true story.”

Some media elites never learn – but the American people have caught on to the ways they manipulate and massage a story.

Sometimes the media just cooks up their own facts. The Washington Post’s so-called “fact checker” branded Trump a liar for saying all hard-working Americans had only begun to see their paychecks grow in 2017.

But Trump was telling the truth. 19 percent of Americans saw their wages fall in 2016, when former President Barack Obama was still in office. The Post hates Trump and decided to run interference for the Democrats.

Sometimes the media glorifies Democrats for the same behavior that they crucify Republicans over.

CNN even ran a series of ads and sent out a tweet that former President John F. Kennedy had a “legendary love life.” JFK may have been heroic in some ways, but he regularly committed adultery with total strangers – even while he was president.

Networks are obsessed over a disproven Russian dossier – and 91 percent of its coverage of Trump has been negative.

The media had almost total control over what Americans knew about politics for decades. But with the advent of the Internet – and websites like The Horn News – the American people have seen that the emperor has no clothes.