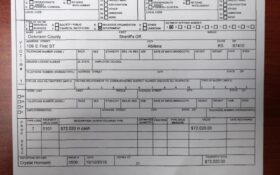 The state has been investigating the Dickinson County Sheriff’s Department for close to four years, with two officials saying in a court filing this year that a “fear of retribution” among department employees had slowed progress. A three-term sheriff lost last year’s Republican primary decisively to a former longtime officer who told voters the department was falling apart.

The mystery has unfolded amid a national debate over whether law enforcement agencies can too easily seize cash and other assets — often without a criminal conviction. Interstate 70 has long been considered a major drug-running corridor.

Meanwhile, there’s no official explanation for what happened to the cash seized in Dickinson County.

“I would like to think that we could get some closure on that,” said Brad Homman, the county administrator.

Abilene, the county seat with 6,400 people, is about 150 miles west (241 kilometers) of Kansas City. Eisenhower’s presidential library gives the town a hint of prairie rectitude, though it had a pre-Ike past as the end of the Chisholm Trail for 1860s cattle drovers.

No criminal charges have been filed over the missing $72,000. The Kansas Bureau of Investigation closed an inquiry into the former sheriff in October 2019 and the missing funds were “fully investigated,” spokesperson Melissa Underwood said.

Yet, Underwood also wrote in a recent email to The Associated Press, “We have open cases involving Dickinson County Sheriff’s Office personnel.”

Some details emerged when a lawsuit forced KBI Director Kirk Thompson and General Counsel Laura Graham to answer questions in writing in late February. They were defending the KBI’s refusal to release records five months after the Abilene Reflector-Chronicle’s parent company sued for disclosure.

Thompson and Graham said officers wouldn’t help the KBI if they knew their statements would become public. “One deputy was advised by commanding officers that he would be fired if he spoke about a theft,” the KBI officials said.

Any picture of what happened is clouded by separate allegations in early 2017 that a lieutenant improperly borrowed $25,760 over 4 1/2 years, most of it from a property room in the basement the county attorney’s office building. The officer later pleaded guilty to felony theft in a case that has prompted questions about how Hoffman ran the department.

The KBI said that the sheriff’s office asked it in late May 2017 to investigate the $72,000 missing from its property room. The sheriff has an evidence room in the county courthouse.

Dickinson County Commission Chairman Lynn Peterson believes people were satisfied then with the sheriff’s leadership and notes that it was the sheriff’s office “that uncovered the fact that money was missing and started gathering information.”

But in May 2018, nearly a year after the sheriff’s office sought KBI help, Purvis asked the state agency to investigate “possible evidence destruction and interference with law enforcement” by Hoffman or his employees.

Local officials’ requests for KBI investigations were confirmed in a September 2020 letter to the Reflector-Chronicle’s attorney from Graham, the KBI’s general counsel. The letter, now public because of the open-records lawsuit the newspaper filed days later, wasn’t more specific about what Purvis wanted investigated.

A KBI agent filed an offense report in October 2018 saying $72,020 was missing in a potential “Theft of property or services.” The report’s front page — the only page typically released in Kansas — does not name suspects.

Graham’s letter said the KBI spent about 18 months investigating the missing money and more than a year investigating allegations involving Hoffman and his employees. The state found “insufficient evidence” for charges.

Also involved was Kansas Attorney General Derek Schmidt’s office, which notified Purvis in July 2019 that it wouldn’t file criminal misconduct charges in Dickinson County. The letter from Assistant Attorney General Michael Serra suggested that a case could not be proven to a jury, though an investigation remained open. He questioned local officials’ evidence-handling policies.

The sheriff’s office did have 21 pages of policies — which Davis said he’s revising — for items in its courthouse property room, including one that said cash or coins worth more than $100 were to be counted by the deputy who seized the money and a second officer before being sealed in tamper-proof packaging.

As for the missing cash, Homman, the county administrator, said it would be nice to get it back.

“It’s money that shouldn’t have been wherever it went.”