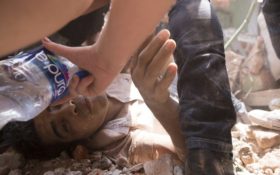 Police, firefighters and ordinary Mexicans dug frantically through the rubble of collapsed schools, homes and apartment buildings early Wednesday, looking for survivors of Mexico’s deadliest earthquake in decades as the number of confirmed fatalities stood at 217. 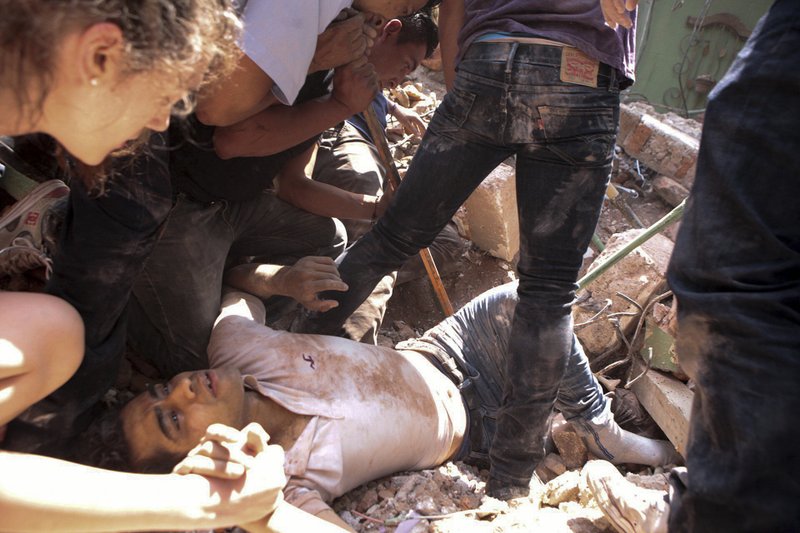 A man is rescued from a collapsed building in the Condesa neighborhood of Mexico City. (AP Photo/Pablo Ramos)

Adding poignancy and a touch of the surreal, Tuesday’s magnitude-7.1 quake struck on the 32nd anniversary of the 1985 earthquake that killed thousands. Just hours earlier, people around Mexico had held earthquake drills to mark the date.

One of the most desperate rescue efforts was at a primary and secondary school in southern Mexico City, where a wing of the three-story building collapsed into a massive pancake of concrete slabs. Journalists saw rescuers pull at least two small bodies from the rubble, covered in sheets.

Volunteer rescue worker Dr. Pedro Serrano managed to crawl into the crevices of the tottering pile of rubble that had been Escuela Enrique Rebsamen. He made it into a classroom, but found all of its occupants dead.

“We saw some chairs and wooden tables. The next thing we saw was a leg, and then we started to move rubble and we found a girl and two adults — a woman and a man,” he said.

“We can hear small noises, but we don’t know if they’re coming from above or below, from the walls above (crumbling), or someone below calling for help.”

A mix of neighborhood volunteers, police and firefighters used trained dogs and their bare hands to search through the school’s ruins. The crowd of anxious parents outside the gates shared reports that two families had received WhatsApp messages from girls trapped inside, but that could not be confirmed. 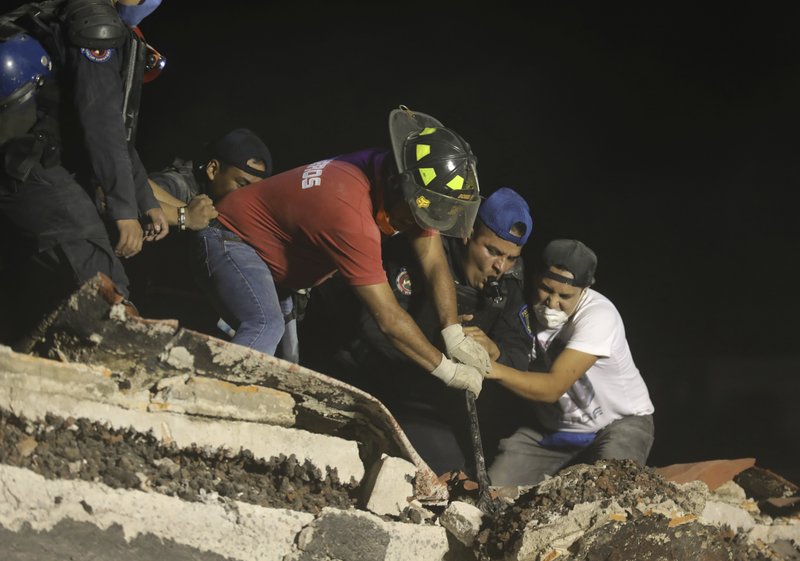 Rescue workers and volunteers search a building that collapsed after an earthquake, in the Colonia Obrera neighborhood of Mexico City.

Rescuers brought in wooden beams to shore up the fallen concrete slabs so they wouldn’t collapse further and crush whatever airspaces remained.

The federal Education Department reported late Tuesday that 25 bodies had been recovered from the school’s wreckage, all but four of them children. It was not clear whether those deaths were included in the overall death toll of 217 reported by the federal civil defense agency. Pena Nieto had earlier reported 22 bodies found and said 30 children and eight adults were reported missing.

In a video message released late Tuesday, Pena Nieto urged people to be calm and said authorities were moving to provide help as 40 percent of Mexico City and 60 percent of nearby Morelos state were without power. But, he said, “the priority at this moment is to keep rescuing people who are still trapped and to give medical attention to the injured people.”

People across central Mexico already had rallied to help their neighbors as dozens of buildings tumbled into mounds of broken concrete. Mexico City Mayor Miguel Angel Mancera said buildings fell at 44 sites in the capital alone as high-rises across the city swayed and twisted and hundreds of thousands of panicked people ran into the streets.

The huge volunteer effort included people from all walks of life in Mexico City, where social classes seldom mix. Doctors, dentists and lawyers lined up alongside with construction workers and street sweepers, handing buckets of debris or chunks of concrete hand-to-hand down the line. 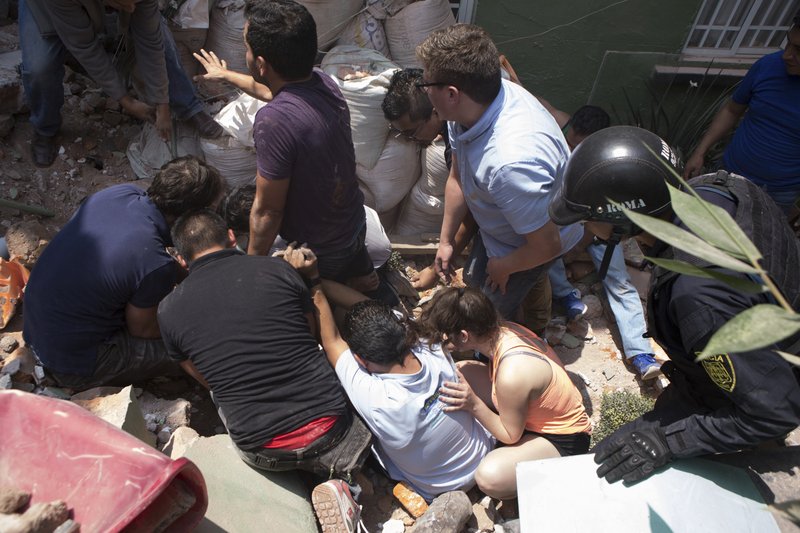 People prepare to pull out a man alive from a collapsed building in the Condesa neighborhood after an earthquake struck Mexico City. (AP Photo/Pablo Ramos)

Dust-covered and exhausted from digging, 30-year-old Carlos Mendoza said two people were pulled alive from the ruins of a collapsed apartment building in the Roma Sur neighborhood during a three-hour period.

“When we saw this, we came to help,” he said, gesturing at the destruction. “This is ugly, very ugly.”

Blocks away, Alma Gonzalez was in her fourth-floor apartment when the quake collapsed the ground floor of her building, leaving her no way out. She was terrified until her neighbors mounted a ladder on their roof and helped her slide out a side window.

The official Twitter feed of civil defense agency head Luis Felipe Puente said 86 dead had been counted in Mexico City and 71 in Morelos state, which is just south of the capital. It said 43 were known dead in Puebla state, where the quake was centered. Twelve deaths were listed in the State of Mexico, which surrounds Mexico City on three sides, four in Guerrero state and one in Oaxaca.

At the site of a collapsed apartment building in Mexico City, rescuers worked atop a three-story pile of rubble, forming a human chain that passed pieces of rubble across four city blocks to a site where they were dumped.

Throughout the day, rescuers pulled dust-covered people, some barely conscious, some seriously injured, from about three dozen collapsed buildings. At one site, shopping carts commandeered from a nearby supermarket were used to carry water to the rescue site and take rubble away.

As night fell, huge flood lights lit up the recovery sites, but workers and volunteers begged for headlamps.

“I think it’s human nature that drives everyone to come and help others,” Cristina Lopez said.

“We are young. We didn’t live through′85. But we know that it’s important to come out into the streets to help,” said her sister Victoria.

Ricardo Ibarra, 48, did live through the 1985 quake and said there hadn’t been anything like it since. 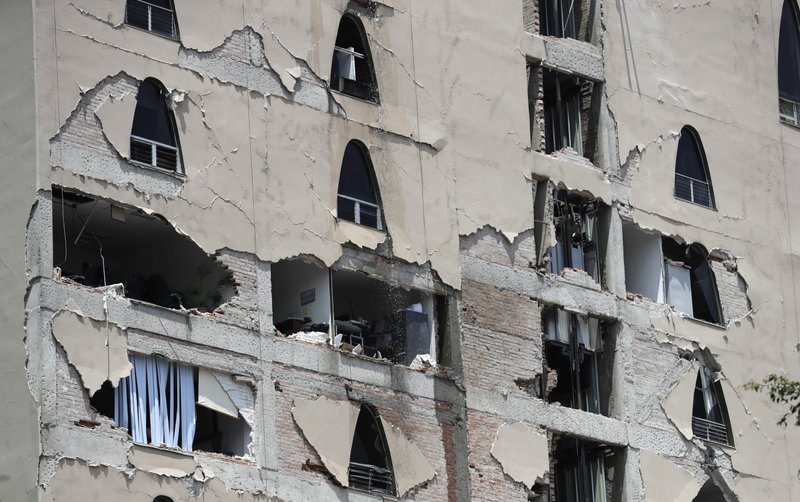 Wearing a bright orange vest and carrying a backpack with a sleeping bag strapped to it, he said he and his friends just wanted to help.

“People are very sensitive because today was the 32nd anniversary of a tragedy,” he said.

Buildings also collapsed in Morelos state, including the town hall and local church in Jojutla near the quake’s epicenter. A dozen people died in Jojutla.

“I told them that it was not a game, that we should be prepared,” Anzures said of the drill. When the quake came, she said, children and teachers rapidly filed out and nobody was hurt. 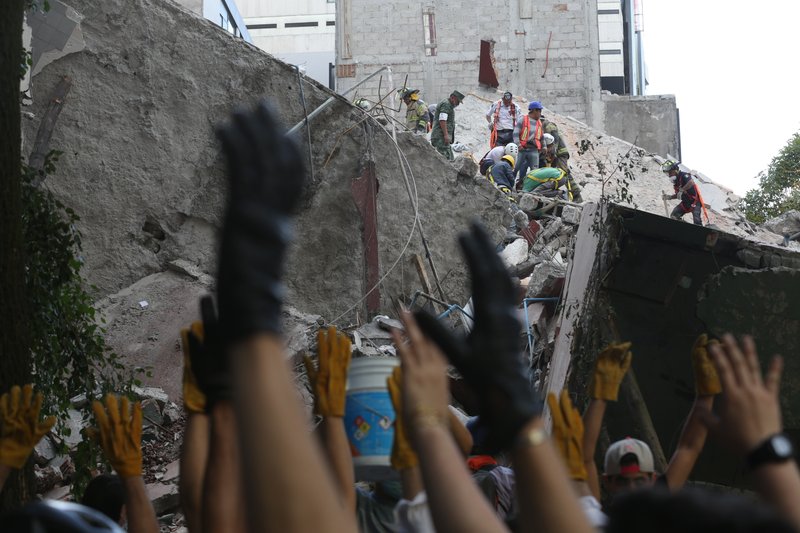 First responders raise their hands asking for silence as they work on removing the rubble of a collapsed building looking for survivors trapped underneath, after a 7.1 earthquake in Mexico City.(AP Photo/Gustavo Martinez Contreras)

Much of Mexico City is built on former lakebed, and the soil can amplify the effects of earthquakes centered hundreds of miles away.

The quake appeared to be unrelated to the magnitude 8.1 temblor that hit Sept. 7 off Mexico’s southern coast and also was felt strongly in the capital.

U.S. Geological Survey seismologist Paul Earle noted the epicenters of the two quakes were 400 miles (650 kilometers) apart and said most aftershocks are within (60 miles) 100 kilometers.