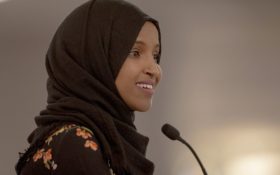 A city located in the district represented by far-left Rep. Ilhan Omar, D-M.N., has decided to eliminate the Pledge of Allegiance during city council meetings.

That’s right — they’re getting rid of the patriotic song altogether — and Omar is likely smiling as the American fabric gets ripped apart.

Members in the St. Louis Park City Council voted 5 to 0 on a measure to end saying the Pledge of Allegiance, claiming they wanted “create a more welcoming environment to a diverse community.”

This feels like it is they’re caving to liberal pressure to “resist” President Donald Trump.

The move is downright unpatriotic.

Making it even more obvious of how anti-American this is, City Council member Anne Mavity said that the Pledge of Allegiance did not reflect the city’s values.

“Not everyone who does business with the city or has a conversation is a citizen,” Mavity stated. “They certainly don’t need to come into city council chambers and pledge their allegiance to our country in order to tell us what their input is about a sidewalk in front of their home.”

As expected, residents in the Minnesota city were furious and took issue with the assertion that the Pledge of Allegiance doesn’t reflect their “values.”

“I think it should be said every time, whether it is in school or meetings or whatever,” David Gohman told local news outlet KARE 11. “We owe it to the country.”

“Cannot believe one person didn’t oppose this. The citizens who voted these people in should be embarrassed and ashamed of the councilmen and themselves,” another person said.

Another resident called the decision “obnoxious.”

So what are the so-called “values” of the city located in the district represented by Omar?

According to FBI statistics, Omar’s district is the terrorist recruitment capitol of the United States.

Fox News reported that “more men and boys from a Somali American community in Minneapolis have — or attempted to join — a foreign terrorist organization over the last 12 years than any other jurisdiction in the country.”

Omar’s district is engulfed with potential terrorists — and she apparently could not care less.

Omar has a long history of defending terrorists over Americans.

In fact, Omar actually defended a group of Somalis who were arrested in 2015 after they attempted to cross into Mexico as part of their plan to join ISIS in Syria.

When the case went to trial, Omar – who served as a state representative at the time – wrote a lengthy letter to the judge requesting a lighter sentencing on behalf of one of the Minnesota men.

“The best deterrent to fanaticism is a system of compassion. We must alter our attitude and approach; if we truly want to affect change, we should refocus our efforts on inclusion and rehabilitation,” she added.

In other words — according to Omar, law enforcement should be nice under any circumstance to promote diversity.

Omar, who came to America as a refugee, has worn out her welcome.