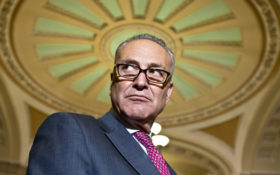 Senate Minority Leader Chuck Schumer, D-N.Y. and House Speaker Nancy Pelosi, D-Calif. have been on the same page the last two and a half years: resist President Donald Trump at all costs.

But Schumer’s career was thrown into chaos this week after Pelosi and her allies went public to blame the New York Democrat for their border bill failing.

They tore Schumer apart and promised he’d regret it.

Last week, Congress passed a massive $4.6 billion package to provide funding and much-needed resources to federal immigration agencies to address the humanitarian and migrant crisis on the U.S.-Mexico border.

Pelosi did not want Trump to get his version of the bill passed, but she had no choice after the Senate passed the president’s bill 80-8, a resounding bipartisan effort.

When it came time for the House to vote on the Trump version of the bill, Pelosi was forced to cave after nearly every single Democrat in the Senate voted with Republicans to pass the bill.

Pelosi felt betrayed and angered that Cryin’ Chuck would allow so many of his colleagues in the Senate to vote in line with Trump and Republicans.

Just hours after the bill passed and Trump signed it, “anonymous sources” close to Pelosi began leaking dirt to The Washington Post.

House Democrats told WaPo that Senate Democrats went along with the Republican bill that “marked the most embarrassing defeat for Pelosi in the six months since Democrats took over the chamber.”

Pelosi and her top allies were “shocked” and said Schumer had given Senate Majority Leader Mitch McConnell the ultimate gift — the ability to brag that Trump’s legislation had overwhelming bipartisan support and should be passed.

Those are certainly fighting words.

Either Pelosi or someone very close to her deliberately reached out to the Post to not only smear Schumer, but to publicly blame him for giving Pelosi one of her worst defeats of political career.

“In addition, according to Senate officials familiar with the talks, neither Pelosi nor any other House Democrat at any point explicitly asked Senate Democrats to block the Senate version of the bill. The real leverage point, they believed, would come after the House sent back an amended Senate bill on Thursday — forcing a negotiation with Republicans,” the Post reported.

“Instead, Democratic centrists in the House who were fortified by the overwhelming Senate vote blocked that strategy, touching off an intense round of finger-pointing,” the outlet added.

It doesn’t take much to understand why Pelosi blasted Schumer given how committed she has been to the anti-Trump resistance.

Maybe Pelosi was so mad at Schumer because her version of the border bill, which failed miserably in the Senate and barely passed in the House, was what liberals really wanted.

Pelosi’s bill did not allocate even $1 for the construction of a new border wall and wanted to use a major chunk of the money to accommodate illegal aliens, who broke the law to enter the U.S.

Pelosi wanted to give just shy of one billion dollars to ensure illegals are fully fed, clothed, accommodated, and transported, yet she wouldn’t even offer even $1 to the border wall.

Her bill was nothing short of a spit in the face of Trump and the millions of Americans who support secure borders and combating illegal immigration.

Schumer was probably was aware of that and knew passing Pelosi’s radical open borders border bill would be political suicide and backfire badly on the Democrats heading into the 2020 election.