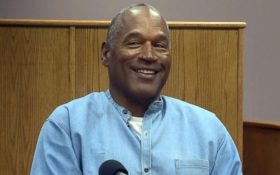 Accused murderer and former NFL star O.J. Simpson promised the world that he had some “gettin’ even to do,” when he joined Twitter last week, creating the username @TheRealOJ32.

And it didn’t take very long to shake up social media in the worst way possible.

The parody account depicts the ex-football star holding a knife and glove — an obvious dig at Simpson’s 1994 trial over the murder of his former wife Nicole Brown, and Ron Goldman.

The man behind the parody account quickly uploaded evidence of the exchange in a series of videos, which shows the O.J. Simpson account sending him violent “knife” threats.

“O.J. Simpson just messaged me,” the man says, narrating the video as he records the private messages where the exchange happened.

The Simpson account demanded the parody be deleted… or suffer consequences.

“Like I said, delete this ‘Parody’ account as you call it or face serious consequences by me. I’ll find your ass one way or another so don’t mess with me. I got nothing to lose. Grow up!”

The Simpson account then followed up with a knife emoji —  in other words, a picture of a knife, to insinuate that he’d injure the man behind the parody account.

It didn’t end there.

Shortly after the man behind the parody account uploaded the revealing video, the Simpson account messaged him AGAIN.

This time, the threats weren’t as cute.

“Seen that video you posted about me. You think I’m playing? Tired of all your bull****. I WILL FIND YOUR A** AND CUT YOU — Don’t believe me? Just watch and see b****,” a message from Simpson’s account says.

He then followed with a string of knife emojis, and a two word message:

But more importantly, one video in particular that he posted mentioned that he was looking forward to vindicating himself:

“For years,” he said, “a lot of people have been able to say whatever they wanted to say about me with no accountability, but now I get to challenge a lot of that BS and set the record straight.”

Thanks to all my new followers. Love learning how to use Twitter. pic.twitter.com/J4JnN59yKl