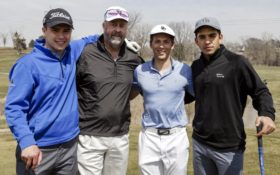 Don Byers didn’t know he was auditioning for a spot on the Bellevue University golf team when coach Rob Brown joined his group as a guest at his club last August.

Byers was booming drives close to 300 yards, making his putts and under par after nine holes.

Brown asked Byers if he had any eligibility left. Byers thought it was a joke.

He’s a 61-year-old grandfather, after all.

“We laughed about it and moved on,” Byers said, “but afterward he said he was serious. I gave him my number and said if you are, give me a call. That’s the last I thought I’d hear about it.”

Brown called Byers a couple weeks later and said the offer stood. Now Byers is a freshman on the Bruins’ seven-man roster.

A true graybeard, he’s the oldest NAIA athlete since 61-year-old Alan Moore kicked an extra point for the football team at Faulkner University of Alabama in 2011. NAIA spokesman Chad Waller said he knows of no older competitors in any sport, past or present. The NCAA doesn’t keep age records. At the junior college level, Ken Mink appeared in three basketball games at age 73 for Roane State in Tennessee in 2008.

The decision to go back to school and play golf wasn’t all that hard for Byers, who logged about 170 rounds last year. His job with the insurance agency he bought in the 1980s gives him flexibility. He also sees value in pursuing a college degree.

Byers mixes easily with his teammates, all but one of whom is from Latin America. He said being old enough to be their grandfather hasn’t necessarily given him privilege.

“Being a freshman,” he said, “I have to get their bags out of the van now and then. But we have a lot fun and they taught me a lot, and I’ve felt I’ve brought a little to the table, too, keeping it kind of light.”

Sophomore Lautaro Marzilio said it was weird at first to have a teammate so much older.

“But after meeting Don, he’s a great person and he’s like one of us,” Marzilio said. “He understands us. We are kind of different eras, but we share the same thing.”

Byers’ first go-round as a student-athlete was more than 40 years ago at the University of Nebraska-Omaha. He was a pitcher on the baseball team and blew out his arm before what would have been his first season. He stayed at UNO two years, leaving in 1977 to enter the insurance business. He and his wife, Deb, have three children and four grandchildren.

He’s a freshman in eligibility under NAIA rules because he never appeared in a game for UNO. Bellevue allowed him to transfer most of the credits he earned at UNO, making him a junior academically.

Byers works mornings at his office and attends classes on campus three days a week. He’s taking courses in English, history and communications. He hasn’t declared a major.

Byers’ wife of 38 years said her initial reaction when Don told her Brown was recruiting him was a sarcastic, “Yeah, right.” When she realized it was no joke, Deb pledged support.

“Go for it. Do it,” she said she told him. “I don’t think a lot of people have this opportunity.”

Though his U.S. Golf Association handicap index is an impressive 2.8 — meaning he would be expected to shoot around 75 on any course — this is Byers’ first foray into competitive golf besides events at his home club, Champions Run in Omaha.

He’s had to adjust. He was accustomed to puffing a cigar and enjoying a beer when playing with buddies. Bellevue athletic director Ed Lehotak told him he had to drop those habits when representing the Bruins. Byers also had to get in better shape because he couldn’t fit into his team-issued golf pants last fall. The 6-foot-4 Byers joined his teammates in a winter conditioning program and has gone from 275 pounds to 230.

College golfers are required to walk and carry their own bags. Byers, who has had two knee surgeries and one on his back, said he would be physically unable to be on the team if he weren’t given a concession allowing him to put his clubs on a remote-control cart.

He has no problem keeping up at practices on the hilly track at Platteview Country Club.

“I’m very shocked at how far he can hit it,” sophomore Lucas Leinen said. “I can’t believe he can walk all this every single day.”

Brown, the coach, said Byers filled one of two roster openings created when a golfer left last year to join the Bellevue soccer team and another one got injured.

Byers said some people believe he shouldn’t have taken a spot that might otherwise have gone to a more traditional college-age golfer.

Byers didn’t make the lineup for the Bruins’ most recent tournament, the TPC Deere Run Invitational in Silvis, Illinois, on March 30-31. He was, however, allowed to compete as an individual. He shot 13-over 84 in the first round and 8-over 79 in 35 mph sustained winds in the second.

“Out of 120, there were only 18 people who beat me the second day,” Byers said. “That gave me a little bit of confidence that I can play with these guys.”

Several coaches told Byers they admired what he was doing, and competitors sidled up to him on the course to ask about his remote-control cart and why he went back to school.

“They get a kick out of it and are pulling for me the whole way,” he said. “I made a 30-foot putt, and they’re all standing behind me and I hear, ‘Nice putt, grandpa.’ I turned around and they’re chuckling, and I just met them.”

Byers said he’s had no second thoughts about accepting Brown’s offer to join the team. His hope is to break into the top five on the team, which would put him in the lineup for team scoring at tournaments.

“I would like to be a factor,” he said. “Coach and I have an agreement that every semester we’ll take a look at it and see where it stands. I guess my goal is to make it hard for him to cut me and be a 65-year-old senior playing golf.”