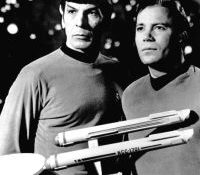 Is one of the 1960’s most iconic television stars in trouble?

The 86-year-old is reported to have been in a guardianship battle with her son, Kyle Johnson.

“You’re trying to get rid of me!” she can be heard shrieking on the audio clipping, reportedly leaked to local station CBS46 Atlanta by a close friend.

It all began with Nichols and her longtime friend Gilbert Bell, who showed the ‘Star Trek’ icon reading court documents for what she claims as the first time. The documents were filed by her son in an attempt to inherit her estate.

According to CBS46, Nichols longtime friend, Gilbert Bell, recorded the audio and turned it into the station. Many close friends of Nichols are questioning her son’s motives.

“I didn’t give permission to have conservatorship over me,” she said. “I didn’t know what he was doing.”

When her son enters the room moments later, the audio clip takes a disturbing turn.

Nichols can then be heard shouting “No!” repeatedly while her son appears to drag her along against her will. “I’m not going home!”

Sadly, the guardianship battle between Nichols and Johnson is nothing new. Bck in 2017, a friend of Nichols, Angelique Fawcette filed legal documents that questioned Johnson’s handling of Nichols, and challenged the dementia diagnosis altogether.

The documents claimed that Johnson told Nichols, “I can’t wait to get rid of this sh*t and sell [your] house and property.”

You can jump to the link here for CBS46′ revealing audio and video.