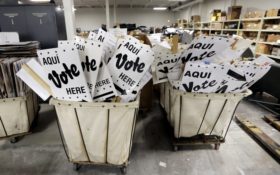 With just a little more than one week until the midterm elections, pundits see a close election with a slight favor for the Democrats.

Reports have speculated that President Donald Trump is driving the polls — with either Americans who vow to vote to support him… or those who are in opposition of him.

Both the Republicans and Democrats have been campaigning for different issues as far as border security, foreign policy, and several other key topics.

As history has proved before, anything can happen. Here are a few game-changers that could tilt the election in either direction:

Heaven forbid this ever happens, but imagine that one of the bombs mailed to Democrats this week actually exploded in the hands of one of its targets… or one of their servants.

There’s no doubt Americans would come together against the domestic terrorist threat, just like we did after 9/11.

It wouldn’t matter who actually sent the package, or why they sent it. We might find out later the person hated Trump.

But everyone would assume a Trump supporter mailed it—and a new, hefty Democrat majority would sweep into both houses. Their first order of business would be to impeach Trump for allegedly inspiring the death, setting themselves up for an easy victory in the 2020 presidential election.

You’d never know it, but the FBI quietly reopened its investigation into former Secretary of State Hillary Clinton for sending classified material over her unsecured homebrew e-mail server a year ago.

What if the FBI announces that former FBI Director James Comey was wrong: Hillary wasn’t just “careless”—she was criminal — and then they hand out an indictment for violating national security?

That would be a huge lift for the president and everyone who said the Clintons got special treatment from the Deep State for decade.

#3  The “migrant caravan” arrives… with terrorists on board.

The media mocked Donald Trump for saying that there are Middle Easterners—possibly even members of terror organizations—in the 14,000-man “caravan” heading for the U.S. CNN barely stopped snickering at Trump’s claims before the Department of Homeland Security proved Trump right: Middle Easterners and criminals really are marching north. A DHS spokesman backed the president in a series of tweets:

.@DHSgov can confirm that there are individuals within the caravan who are gang members or have significant criminal histories.

Then “fake news” reporters said “only 72” illegals were from the Middle East… and it will take them months to reach the U.S. border, but imagine this:

The caravan stops in a Mexican town for an overnight siesta as CNN cameras catch a group of non-Hispanic young men huddling around something. They back up to reveal it is a U.S. flag… on fire. The whole caravan explodes in screams of approval…but then they hold up the black ISIS flag and start shouting “Allahu akhbar!”

Suddenly, all the Democrats telling us to embrace the poor “refugees” look like fools… and a wall on the border never seemed like a better idea.

Whenever they’re out of power, Democrats pretend they’re “centrists”—normal folks, just like you — who only want to stop the Republicans from running wild in the capital. It’s a lie, and hidden videos might just prove it.

James O’Keefe’s Project Veritas has already released humiliating footage of staffers for Democrat Senate candidates in Tennessee and Missouri saying that they’re lying to voters and will be “super liberal” when they’re elected.

And then, footage of the candidates themselves threatens some Democrats—like Arizona Democrat Kyrsten Sinema, who called stay-at-home moms leeches and seems to hate her home state, or Georgia’s Stacey Abrams, who burned her state flag.

If anybody can get the goods, it’s O’Keefe… and who knows what bombshells he’s holding for the last days of the election?

Trump has been the first president to challenge China on trade in 30 years. He slapped tariffs on $250 billion of Chinese goods, and China retaliated against U.S. products.

Economists say this will lead to a never-ending trade war, where each side sanctions the other. But suppose they’re wrong.

Imagine Xi Jinping steps up to a microphone in Beijing and says that China will open up its billion-person market to U.S. goods. It’s not likely… but it’s happened before. The EU backed down on its showdown with the U.S., and then Canada joined the new NAFTA.

If China follows them, the stock market hits the roof, factories go back into production, and Trump looks like the smartest negotiator in years.

The idea of stopping the Democrats from holding another set of Kavanaugh hearings—and getting a Supreme Court with a 6-3 conservative majority—would energize both sides like never before.

But there’s a problem: The Democrats are already as motivated as possible. They hate Trump and want him run out of town on a rail. But the idea of another round of ugly charges, personal smears and “search and destroy missions” would get every GOP-leaning voter to the polls… and then some.

With only 11 days until the midterm election, Republicans have they said they would be “delighted” if the GOP retains control of both houses of Congress. But, they lose control, 35 percent would be “angry.”

The answer should be easy — and Democrats should be very disappointed come Nov. 7.