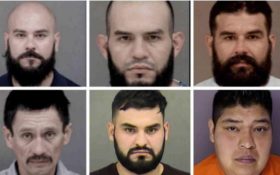 How many times does President Donald Trump have to warn the country?

“Members of the investigative team believe — based on wire intercepts, surveillance and other facts discovered from the investigation — that Oscar and Regulo transport illicit proceeds, derived from the sale of narcotics, when they travel from Myrtle Beach to Charlotte,” according to federal court documents, reported by WMBF.

They’ve been identified as the following:

They had set up shop in Charlotte and were operating as high-level cartel members.

This is striking evidence that the border wall is not just a problem to the states bordering Mexico, such as Texas, Arizona and New Mexico. This drug bust is a direct message: illegal immigrants have the potential to infiltrate anywhere in the U.S., from the northeast to the midwest to the pacific northwest. And criminal illegals bring violent problems with them.

The illegal immigrant cartel drug ring began operating under former President Barack Obama’s watch in 2013. Over a six-year period, the influx of drugs could surely do a number on communities which are already struggling. Drug cartels such as these only exacerbate the issues of impoverished cities and towns.

Experts say it’s a humanitarian crisis to let America’s cities continue to be ravaged by illegal immigrants who come from unstable countries like Nicaragua and Colombia — clear hotbeds for corruption. Agencies such as ICE and other federal crime forces will have to crack down on the operations already set up in the U.S.

But to prevent further destruction, a border wall must be built.