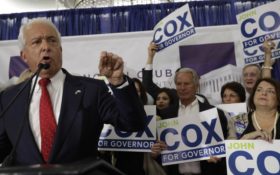 John Cox, a Republican business owner, snagged a spot in the November runoff for California governor with the help of President Donald Trump. He is set to participate in the winner-take-all race with Democrat Gavin Newsom.

Cox got about a quarter of the votes counted so far in Tuesday’s election to easily outdistance former Los Angeles Mayor Antonio Villaraigosa for second to Newsom, who won by a comfortable margin. Cox had been struggling to break clear of fellow Republican Travis Allen until Trump tweeted his endorsement two weeks ago — 273 characters that rallied the president’s fans.

Because of California’s “jungle primary,” the top two finishers — regardless of party — advance to a runoff in November.

Newsom, the state’s lieutenant governor and former mayor of San Francisco, had said during the primary he preferred a Republican opponent in the fall. He told supporters Tuesday that he relishes a fight with Cox, who he called “a foot solider” for Trump in California.

Meantime, Cox made it clear he’ll be fighting Newsom on taxes and California’s high cost of living.

“It wasn’t Donald Trump who made California the highest tax state in the country,” Cox told enthusiastic supporters. “It was Gavin Newsom and the Democrats.”

Cox, 62, has worked as a lawyer, accountant, wealth manager and investor in the Chicago area. He now owns thousands of apartment units in the Midwest.

In the early 2000s he ran unsuccessfully for a string of offices in Illinois — U.S. House, twice for the U.S. Senate, and Cook County Recorder of Deeds, a job he wanted to see eliminated. He also ran for Illinois GOP chairman.

In his 2004 Senate run, he shared a crowded debate stage with then-state Sen. Barack Obama and sparred one-on-one with the future president over the Iraq war. He later ran for president in 2008 and fought to get into Republican debates before dropping out, but his name appeared on the ballot in several states.

He bought his house in Rancho Santa Fe, outside San Diego, in 2007 and moved there full-time in 2011, according to spokesman Matt Shupe.

Cox, who has largely self-funded his campaign for governor, decries what he calls the corrupting influence of special interests — a line of attack he’s sure to deploy against Newsom, who is backed by heavy-hitting unions, businesses and interest groups.

He’s also focused heavily on California’s high taxes and cost of living. He’s one of the most prominent backers of a ballot initiative that would repeal recent increases in gasoline and diesel taxes, which is likely to qualify for the November ballot.

Tuesday’s primary included a preview of the potency of the gas tax as a political motivator. State Sen. Josh Newman, a Democrat targeted for supporting the gas tax hike, was recalled by a wide margin.

In the race for governor, Cox’s second-place finish was a victory for state GOP in the largely Democratic state. It avoided a worst-case scenario where Republicans would stay home for lack of a candidate in the races for governor and U.S. Senate, thereby imperiling vulnerable Republicans in other races.

No Republican has won statewide here since 2006. And Trump is well-liked by the GOP base that boosted Cox. Let’s get John Cox elected as California governor!