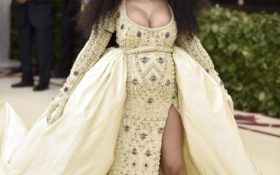 Liberal Hollywood celebrities pushed the envelope again at this year’s Met Gala where the theme was “Heavenly Bodies: Fashion and the Catholic Imagination.”

Church-inspired items and wardrobe were showcased at the super private event for millionaires — who decorated themselves with crosses, rosary beads, veils, and crowns as props in their over-the-top outfits.

Some stars took the Catholic theme too far — and social media users took to Twitter to share their disgust on Monday evening.

Pop star Katy Perry took to the red carpet wearing a golden mini dress with larger-than-life angel wings, and posed for pictures kneeling on the red carpet with her hands in a prayer position.

“Ladybird” director Greta Gerwig turned heads — and infuriated Twitter users — with her black and white gown that was inspired by a typical nun garb. And actor Jared Leto wore an outfit resembling Jesus Christ with a crown of thorns.

Where do these celebrities get off thinking it is socially acceptable to dress like a nun or Jesus Christ? Imagine the unhinged outrage if celebrities had dressed up in outfits mocking Islamic garb like Muhammad and imams and suicide bombers.

Imagine using my religion to do your fashion show… disgusting! #Catholic #METGALA #METGalaIsOverParty

*NEW COLUMN*
If the Met Gala was Islam or Jewish-themed, all hell would break loose – so why was it OK for a bunch of flesh-flashing celebrities to disrespect MY religion?https://t.co/aXXTl8P5eE pic.twitter.com/MiLLlJFaSu

According to the exhibit’s curator, Andrew Bolton, celebrities were told to dress in their “Sunday best” and that the dress code given to guests was “an implicit plea to dress somewhat more modestly.”

If the tables were turned and the theme was inspired by any other religion, these liberal celebrities would be met with violent protest and angry mobs.

It goes to show the complete lack of respect Hollywood has for average Americans.