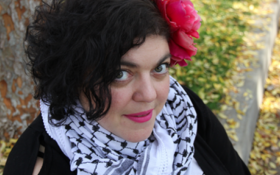 A liberal professor from California State University’s Fresno campus has come under fire after tweeting she was “happy” to hear former first lady Barbara Bush is dead.

Randa Jarrar is a professor in the English department at California State University, Fresno (also known as Fresno State) and began her Twitter rampage over Barbara’s death only an hour after the announcement was made. She started by attacking those who offered their condolences to the Bush family.

“Barbara Bush was a generous and smart and amazing racist who, along with her husband, raised a war criminal. F*** outta here with your nice words,” the professor tweeted. 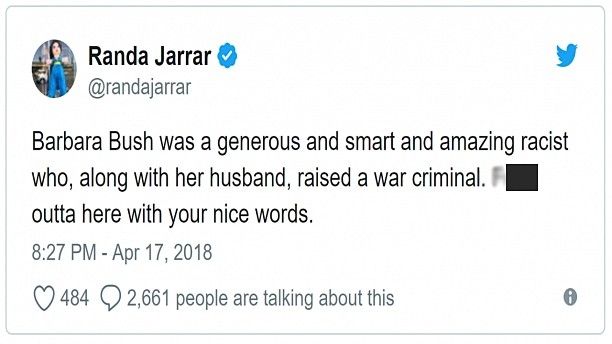 Barbara died on Tuesday night, only days after a family spokesman announced she declined to undergo further medical care.

Jarrar had her own words, calling Barbara a “witch” that deserved to die before telling outraged social media users that she made $100,000 a year and couldn’t be fired for her nasty attack.

She tweeted,“PSA: either you are against these pieces of s— and their genocidal ways or you’re part of the problem. That’s actually how simple this is. I’m happy the witch is dead. Can’t wait for the rest of her family to fall to their demise the way 1.5 million Iraqis have.” 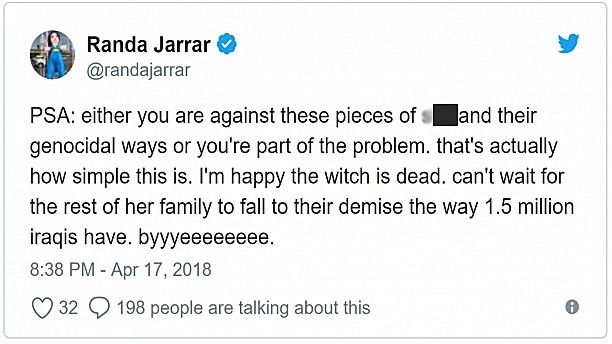 The professor’s tweets drew backlash from many Twitter users, including The Daily Wire Editor-in-Chief Ben Shapiro who tweeted, “Good news: you won’t have to see her when she’s in heaven and you’re burning in hell.”

Fresno State has responded to the backlash of Jarrar’s Twitter rant by extending “deepest condolences to the Bush family,” and continued by stating, “we share the deep concerns expressed by others over the personal comments made today by Professor Randa Jarrar, a professor in the English Department at Fresno State. Her statements were made as a private citizen, not as a representative of Fresno State.”

Following the backlash to her tweets, Jarrar changed her Twitter account to private and reportedly continued to claim that she cannot be fired by Fresno State because of her tenure.

“I work as a tenured professor. I make 100K a year doing that. I will never be fired. I will always have people wanting to hear what I have to say,” she wrote on Twitter.

The university’s provost, Lynnette Zelezny, responded her her claims by stating, “To answer the technical question: Can she not be fired? The answer is no,” according to The Fresno Bee.

Jarrar’s ex-husband has even spoken out on her Twitter outburst.

“The United States has afforded her and her family everything. I don’t understand where this hatred comes from,” continued Cipollaro.

According to her author page, Jarrar “grew up in Kuwait and Egypt,” and did not move to the U.S. until after the Gulf War. As her ex-husband explains, she has been been given a fortunate life since moving to America and her hatred towards the country is unwarranted.

Jarrar recently changed her Twitter bio to state, “Currently on leave from Fresno State. this [sic] is my private account and represents my opinions.” Fresno State English Department’s website also lists her as on “LEAVE.”