50,000 sign petition for the removal of kneeling NFL legend's statue - The Horn News 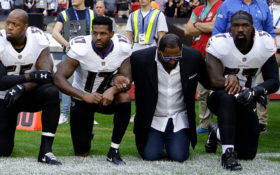 Nearly 50,000 people have signed an online petition asking for the removal of a statute of retired Baltimore Ravens star Ray Lewis after he joined other NFL players kneeling during the national anthem.

The petition on change.org says the anthem honors the United States and its veterans. It reads: “To kneel during it is disrespectful, regardless of what you are protesting.”

A Maryland Stadium Authority spokeswoman told The Baltimore Sun extra security has been added to M&T Bank Stadium, including the plaza where Lewis’ statue is located.

Many other players also knelt Sunday in response to President Donald Trump’s call for owners to fire players who refuse to stand during the anthem.

Lewis said on “Inside the NFL” that he prayed while he knelt to “simply honor God in the midst of chaos.”