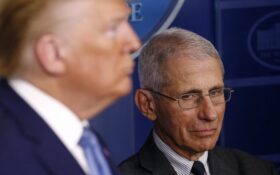 500 doctors signed a personal letter to President Donald Trump, urging him to reopen the country as fast as he can.

These experts are warning that if Americans don’t get out soon, the health of the country as a whole will continue to decline to unprecedented lows.

A growing number of medical professionals are eyeing new trends during the Wuhan flu virus pandemic.

The suicide hotlines calls have increased by 600%. Both alcohol and cigarette sales have skyrocketed tremendously. Americans unknowingly suffering from cancer and heart disease are going undiagnosed. Police are responding to an increased number of domestic violence incidents.

“We are alarmed at what appears to be the lack of consideration for the future health of our patients,” the letter read. ” … It is impossible to overstate the short, medium, and long-term harm to people’s health with a continued shutdown.”

To Trump’s credit, he acknowledged long ago that the country needed to reopen for this very reason.

Even as far back as April, Trump told the media that closing down the country was just as dangerous as reopening it.

TRUMP on ending social distancing: "Staying at home leads to death also. It's very traumatic for this country. But staying at home, if you look at numbers, that leads to a different kind of death, perhaps …so it's a very big decision. It's the biggest decision I will ever make" pic.twitter.com/TM1AIR19OG

When Trump mentioned it a month ago, it was rarely mentioned.

Now, doctors words are proving there may be something to what he was saying.

Dr. Simone Gold, who authored the letter, appeared on Fox News to shed some light on the developments.

“We just want America to hear the story. We feel like there is one narrative out there,” Gold said.

“You need to hear the whole picture, the rest of the story,” he said.

You can read the full letter for yourself here.