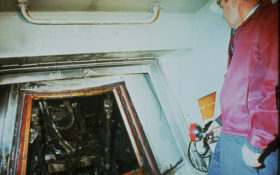 A relic from America’s first space tragedy is finally going on display this week, 50 years after a fire on the launch pad killed three astronauts at the start of the Apollo moon program.

The scorched Apollo 1 capsule remains locked away in storage. But NASA is offering visitors at Kennedy Space Center a look at the most symbolic part: the hatch that trapped Gus Grissom, Ed White and Roger Chaffee in their burning spacecraft on Jan. 27, 1967.

A flash fire erupted inside the capsule during a countdown rehearsal, with the astronauts atop the rocket at Cape Canaveral’s Launch Complex 34. A cry came from inside: “Got a fire in the cockpit!” White struggled to open the hatch before quickly being overcome by smoke and fumes, along with his two crewmates. It was over for them in seconds.

Investigators determined the most likely cause to be electrical arcing from defective wiring.

With its moon program in jeopardy, NASA completely overhauled the Apollo spacecraft. The redesigned capsule — with a quick-release hatch — carried 24 men to the moon; 12 of them landed and walked on its surface.

For the astronauts’ families, Apollo 1 is finally getting its due. The tragedy has long been overshadowed by the 1986 Challenger and 2003 Columbia accidents. Remnants of the lost shuttles have been on display at the visitor complex for 1 ½ years.

“I’m just so pleased that they finally decided to do something — visibly — to honor the three guys,” said Chaffee’s widow, Martha. “It’s time that they show the three who died in the fire appreciation for the work that they did.”

On Friday — the 50th anniversary — the crew’s families will help dedicate the new exhibit. For most of them, a private tour Wednesday marks the first time they’ve seen any of the capsule.

“This is way, way, way long overdue. But we’re excited about it,” said Scott Grissom, Gus’ older son. NASA was embarrassed about the fire “and that’s why they pretty much kept it in the closet as long as they have.”

Like the rest of America, NASA was in shock and simply did not want to talk about it, said Martha Chaffee. Exhibits at Kennedy and elsewhere would mention the fire but not highlight it.

As the years and decades rolled by, Apollo 1 became a mere footnote in space history. Chaffee’s daughter, Sheryl, who retired last month after working at Kennedy for 33 years, recalls having to buy a memorial wreath herself to display at the space center on the 20th anniversary.

The Astronauts Memorial Foundation took over the annual observance that honors all astronauts killed in the line of duty — this year’s ceremony is Thursday. But it wasn’t until NASA unveiled its tribute to the 14 Challenger and Columbia astronauts in June 2015 that the agency wondered why it hadn’t done anything similar for Apollo 1.

“This wasn’t our generation … it wasn’t on our radar” like the shuttle accidents were, explained Kelvin Manning, associate director of Kennedy Space Center. Determined to make things right, he and others at Kennedy began work on a display.

NASA consulted the two surviving widows and six children, explaining it wanted to honor the three men and their sacrifice, and show how Apollo 1 ultimately paved the way to the moon. Grissom, an original Mercury astronaut, was the second American to fly in space. White was the nation’s first spacewalker. Chaffee was the rookie for the flight, a demo in low-Earth orbit.

With the families’ blessing, NASA last year pulled the hatch from storage at Langley Research Center in Virginia.

All three layers of the hatch underwent preservation, but were not altered in any way. The white outer hatch is still discolored and pitted, with what looks to be charring in an upper corner. The middle hatch appears darkened. The orange inner hatch is scuffed.

In the very next display case is the redesigned hatch. It was just one of numerous changes made to the spacecraft, as well as to procedures. No more pure oxygen, high-pressure cabin atmosphere on the ground, for example, and everything fireproofed inside. The exhibit is in the same building that holds one of three remaining Saturn V rockets built for moon shots.

Bonnie Baer, White’s daughter, is grateful the entire capsule is not on display, as so many other family members have been urging for decades. “I want them to be remembered for the other things and not necessarily for the accident,” she said.

As the 30th anniversary of the fire approached, Betty Grissom, Gus’ widow, had pushed to have the capsule put on public display. The request was denied.

“There’s a long list of places where really bad things happened to our country, but we display those respectfully and appropriately,” Scott Grissom said, citing the Alamo, Gettysburg and the Arizona Memorial at Pearl Harbor.

The retired FedEx pilot said displaying the hatch is a start.

“This is a long overdue step at doing right.”