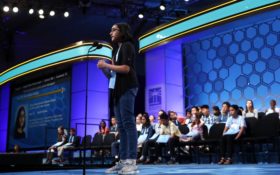 The finals of the Scripps National Spelling Bee have begun, with 50 kids on stage competing for more than $50,000 in cash and prizes and a new, custom-designed trophy.

This year’s bee had the biggest field ever, with 562 spellers, more than half of whom got in through Scripps’ wild-card program. Last year was the first time that wild cards were allowed into the bee, and the eventual champion was a wild card.

Thursday’s finalists include nine spellers who finished in at least a tie for 10th last year. The field will be narrowed to about a dozen spellers in the morning and early afternoon before the prime-time finals on ESPN.

The last 14 champions and 19 of the past 23 have been Indian-American.