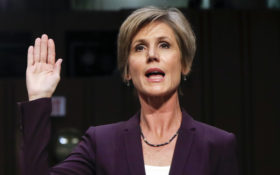 Unfortunately for them, the whole thing was a big flop.

The congressional testimony Monday from Yates marked her first public comments about the concerns she raised and filled in basic details about the chain of events that led to former National Security Adviser Michael Flynn’s ouster in early February, but there wasn’t much new discussed.

Yates, appearing before a Senate panel investigating Russian interference in the election, described discussions with Don McGahn, the Trump White House counsel, in which she warned that Flynn apparently had misled the administration about his communications with Sergey Kislyak, the Russian ambassador.

Shortly thereafter, the White House asked Flynn to resign after reports indicated he had lied about the nature of the calls he made to Russia.

But the day wasn’t a total loss.

Because while the liberal media didn’t get much ammunition to attack Trump with, there are five critical events that happened that made them look foolish.

1) It was former President Barack Obama’s administration — not Trump — that gave Flynn his high-level security clearance.

Despite the Democrats pleas of innocence, there’s simply no denying this one.

It was Obama’s administration that gave Flynn high-level security access — and they never withdrew it.

So, either Obama was lying about having prior knowledge of Flynn’s connections to Russia. Or, worse, he did know… but didn’t do anything about a potentially compromised foreign agent with high-level security clearance.

If Obama knew Flynn was compromised months before Trump took office — like he claims — then his administration did shockingly little about it.

Either way, Yates’ testimony made it clear the previous administration hasn’t been telling the whole truth.

Of course, the mainstream media won’t discuss that, because…

The liberal media is essentially being subsidized by the American taxpayer to broadcast Democratic propaganda.

Think about it: This hearing gives Democrats a national stage to spoon-feed questions to Yates, an Obama political ally, about Trump.

Despite there being zero evidence the Trump campaign colluded with Russian intelligence officials to tamper with the evidence, Democrat lawmakers are using the opportunity to dominate the news.

Democratic lawmakers get a full day’s worth of anti-Trump sound bites ready for their liberal journalist friends.

The mainstream media then turns around and spoon-feeds these ready made soundbites to the American people.

It’s political theater that costs millions of dollars — and it’s all being paid for by you, the American taxpayer.

Unfortunately for liberals, things at the hearing didn’t stick to the script completely.

James Clapper, the former director of national intelligence under Obama, let an under-reported secret slip during his public testimony.

Clapper admitted the Obama administration and their political allies had access to foreign intelligence agencies’ spy efforts against the Trump campaign.

Of course, Obama had previously denied Trump’s accusations that he’d known about foreign wiretapping of Trump Tower during the 2016 presidential campaign.

It was a claim Obama called “ridiculous” and his aides reported the former president was less-than “thrilled” about the accusation.

Clapper says European intelligence passed on info to U.S. about contacts between Russians and the Trump campaign https://t.co/FWGGbeFxsD

4) Ted Cruz unloaded on Sally Yates, and warned that her illegal actions as acting Attorney General could land her in deep trouble

The questions weren’t all softballs from Democrats.

During the hearing, Yates got into a heated exchange with Texas Sen. Ted Cruz — and Cruz gave her a chilling warning about her prior actions.

Yates, a longtime federal prosecutor, was fired by Trump on Jan. 30 after refusing to defend his travel ban.

And it could land her in deep trouble.

Cruz began by citing a section of the Immigration and Nationality Act, which provides Trump with broad power to suspend the entry of foreigners that could hurt “to the interest of the” United States.

“Would you agree that that is broad statutory authorization?” Cruz asked.

“I would, and I am familiar with that,” Yates responded, and said she was concerned whether the executive order was constitutional.

Cruz then laid into Yates, saying she was making the “arguments that we can expect litigants to bring — partisan litigants who disagree with the policy decision of the president” and that she did not act properly in her role as Attorney General.

Cruz then referenced a Department of Justice statement from the Office of Legal Counsel as proof that Trump’s order was approved “with respect to form and legality.”

“That is a determination from [Department of Justice] on January 27 that it was legal,” Cruz said. “Three days later, you determined, using your own words, that ‘although OLC had opined on legality, it had not addressed whether it was wise or just.'”

Yates responded simply that she believes Trump’s “intent is laid out in his statements.”

5) After all that, there remains zero evidence the Trump campaign colluded with Russia

It’s not something the mainstream media will admit, but the facts are simple.

There is no evidence of any wrongdoing.

Everything else is political theater designed to score cheap political points.

Here’s what the president had to say —

Director Clapper reiterated what everybody, including the fake media already knows- there is "no evidence" of collusion w/ Russia and Trump.

Sally Yates made the fake media extremely unhappy today — she said nothing but old news!