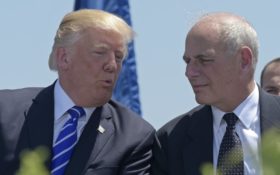 Former Chief of Staff Reince Priebus is out – and retired General John Kelly is taking over.

Conservatives are cheering over President Donald Trump’s newest pick, but liberals are shaking at the strength of this decorated veteran.

Sponsored: Always Be Prepared In The Event Of An Emergency

I am pleased to inform you that I have just named General/Secretary John F Kelly as White House Chief of Staff. He is a Great American….

…and a Great Leader. John has also done a spectacular job at Homeland Security. He has been a true star of my Administration

I would like to thank Reince Priebus for his service and dedication to his country. We accomplished a lot together and I am proud of him!

Priebus says he offered his resignation after Trump indicated he wanted to go in a different direction.

Kelly is a retired Marine Corps general and could bring military-style discipline to a White House undercut by insider quarrels.

But we can’t help but wonder, who is Gen. Kelly, and how will he change the Trump administration.

Here are 5 things every American should know about the new White House chief of staff.

Former Trump campaign manager Cory Lewandowski, who was ousted from the campaign in June 2016, said on NBC’s “Meet the Press” that he expected Kelly would “restore order to the staff” but also stressed that Trump was unlikely to change his style.

“I say you have to let Trump be Trump. That is what has made him successful over the last 30 years. That is what the American people voted for,” Lewandowski said. “And anybody who thinks they’re going to change Donald Trump doesn’t know Donald Trump.”

2. He served in the United States Marine Corps during Operation Desert Storm

Kelly served in the Persian Gulf War in January and February of 1991, during Operation Desert Storm.

Following his retirement in 2016, Kelly told marines.mil “I never quite understood the definition of bravery until watching young men and women do things that were absolutely crazy to do because they were well trained and they had the capability to do their jobs.”

3. He oversaw the prison at Guantanamo Bay

Kelly led the U.S. Southern Command for four years, overseeing military operation in the Caribbean and Central and South America. Part of his duty in this role was to oversee the prion at Guantanamo Bay, where he negotiated the prisoner swap for U.S. Army Sgt. Bowe Bergdahl – a move he referred to as “unusual.”

Kelly argued against former President Barack Obama’s efforts to close the prison, especially the claim the it was being used by terror groups for recruitment.

He told Defense One, “Bombing the sh*t of out ISIS in Iraq and Afghanistan, Syria, that would maybe irritate them more than the fact we have Guantanamo open.”

4. His son died in combat

In 2010, Kelly’s son Lt. Robert Michael Kelly died in Afghanistan. While Kelly has kept his public statements about his son to a minimum, he has offered advice to other Gold Star families.

He said he receives letters from families asking if it was worth it, to which he says, “It doesn’t matter. That’s not our question to ask as parents. That young person thought it was worth it, and that’s the only opinion that counts.

Kelly is the highest-ranking military officer to lose a child in Iraq of Afghanistan.

5. He takes on his new role at a time of escalating foreign tensions

Kelly starts his new job as tensions escalate with North Korea. The United States flew two supersonic bombers over the Korean Peninsula on Sunday in a show of force against North Korea, following the country’s latest intercontinental ballistic missile test. The U.S. also said it conducted a successful test of a missile defense system located in Alaska.

Sen. Dianne Feinstein, D-Calif., said on CBS’ “Face the Nation” that she hopes Kelly can “be effective,” and “begin some very serious negotiation with the North and stop this program.”

Another diplomatic fissure opened Sunday when Russian President Vladimir Putin said the U.S. would have to cut its embassy and consulate staff in Russia by several hundred under new sanctions from Moscow. In a television interview, Putin indicated the cutback was retaliation for new sanctions in a bill passed by Congress and sent to Trump.

Trump plans to sign the measure into law, the White House has said. After Putin’s remarks, the State Department deemed the cutbacks “a regrettable and uncalled for act” and said officials would assess the impact and how to respond to it.