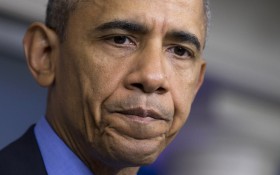 By The Horn Editorial Staff

It’ll still be a little more than a year before President Barack Obama rides off into the sunset – but plenty of angry American voters want to give him the send-off he deserves right now.

And that means impeachment.

For years members of Congress have offered a list of excuses for dragging their feet on impeachment. They’ve claimed that the move lacks popular support and that there are not enough votes in the Senate for an eventual conviction.

But as Congressman Walter Jones (R-NC) argued earlier this year, Obama’s questionable decisions and rampant abuses of power have left Congress with a “Constitutional duty” to act.

Here are just five reasons Obama deserves to be impeached:

Obama has made it easier than any president in U.S. history for illegal immigrants to remain in America. Under his immigration enforcement programs, up to 87 percent of illegals are basically safe from any deportation actions, according to a report from the Migration Policy Institute. The MPI report found that many of these illegals even have criminal records.

Obama has also failed to take action on so-called “sanctuary cities” like San Francisco, which refuse to cooperate with the federal government to apprehend illegal immigrants.

In 2014 Obama shocked Americans when he agreed to release five Taliban commanders in exchange for Army Sgt. Bowe Bergdahl, who abandoned his post in Afghanistan. The prisoners released by Obama included a founder of the Taliban movement who had ties to Osama bin Laden, and a man who was still “encouraging acts of aggression,” according to his Guantanamo case file.

Obama has broken a promise America made to millions of its veterans. Reports emerged last year of veterans who were dying while waiting for medical appointments at Veterans Affairs hospitals. Some hospitals were even keeping secret waiting lists so administrators could meet performance objectives.

While President Obama promised to clean up the mess and make sure our veterans get the care they’ve earned, his efforts have been nothing short of incompetent. A year after the scandal first broke, the number of veterans on waiting lists had actually increased by 50 percent.

As Rush Limbaugh said, President Richard Nixon only dreamed about doing what former IRS director Lois Lerner did under Obama’s watch. Under Lerner’s leadership, the IRS was accused of targeting conservative non-profit groups, including those with “Tea Party” in their names. Lerner eventually resigned in disgrace and was even declared in Contempt of Congress.

But an investigation by Obama’s Department of Justice clearer her of wrongdoing in the IRS scandal and she’s never been punished. In Lerner’s case, the Obama administration made a clear effort to avoid upholding the law.

Obama and his former Secretary of State Hillary Clinton have been accused of lying about what they knew about threats to the compound, and of failing to provide adequate security.

There also appears to have been a coordinated effort by the Obama administration to blame the attacks on a spontaneous reaction to a controversial YouTube video, even though officials knew the attack was coordinated in advance.

Tell us what YOU think! Do you agree that Congress should impeach President Obama, and what would be your reasons?