5 most dangerous threats to conservatives... this week - The Horn News 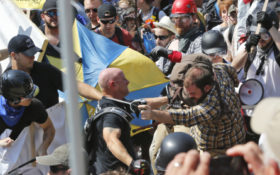 Congressman Steve Scalise knows what happens when political rhetoric gets too heated – and he sees the day coming when unhinged Democrats will get a Republican killed.

“Some on the left are inciting this violence, and frankly they should be called out on it,” the congressman, who was shot by a left-wing political fanatic last summer, said this week. “You’ve got death threats and literal attacks on lives and frankly I want to see the left stand up to this.”

Things are getting worse every day. Just this week the left-wing, President Donald Trump-hating, Democratic base committed violence at least 5 separate times.

GOP candidate Rudy Peters was attacked at the Castro Valley Fall Festival on Sunday as he heard a man yell, “F— Trump!” Then the knifeman – 35-year-old Farzad Fazeli – gave Peters the middle finger and got right in his face.

“He’s screaming, ‘I’m gonna kill you, mother—er!’” Peters, who is running for Congress as a pro-Trump Republican, remembered.

Then Fazeli pulled a switchblade. Peters only survived because the blade did not work and Peters, who is a physically capable man, defended himself.

Peters’ Democratic opponent, incumbent Democrat Eric Swalwell, to his credit, tweeted: “It’s NEVER okay to use violence to settle political disagreements (or any disagreement).” But too many Democrats turned a blind eye to the attempted murder of a Trump supporter.

America First organizers planned to meet at the Trump International Hotel in Washington to talk about how to “Make America Great Again” – but the far-left wanted to leave their bodies lying in a pool of blood.

On Tuesday, conservative writer Cassandra Fairbanks tweeted, “Who is going to the MAGA meetup tonight?”

A left-winger replied, “I am coming with a gun and I expect to get numerous bloodstained MAGA hats as trophies.”

The anonymous account used a Democratic Socialist symbol – two people holding hands and a rose – as its avatar.

But fearless Trump supporters met anyway – with extra security from the hotel and D.C.’s Metropolitan Police Department – and the meeting went off without a hitch.

The Democratic base is shaking in its boots about losing control of the Supreme Court. Since most Americans reject their agenda, liberals rely on unelected judges to force their radical views on the American people.

Supreme Court nominee Brett Kavanaugh could kill all that and bring the Constitution roaring back to life. So, the Democratic base has pulled out all the stops to kill his candidacy… and possibly anyone who votes for him.

Senator Susan Collins, a pro-choice Republican, said leftists have called her office threatening to kill her or her staffers if she votes to confirm Kavanaugh to the High Court.

“In one case – and we are going to turn this over to the police, but unfortunately, of course, the person didn’t leave a name or number – but they actually threatened to rape one of my young female staffers,” Sen. Collins told the Wall Street Journal on Tuesday.

Where’s the #MeToo movement when you need them?

The Albany County Republican Party moved into a new headquarters this week and finished up by hanging a “Make America Great Again” sign in the window. But evidently, even that Trump slogan can “trigger” some left-wingers to commit violence.

At 3:25 Thursday morning, the local fire department found that someone had broken the window where the sign had been hanging and set the first floor office ablaze.

Police say if the fire had not been caught in time, it could have spread and threatened life and property in the town of Laramie.

Albany County GOP chairman Ben McKay said it’s no coincidence that the fire came less than 48 hours after the Republicans set up shop.

“This was intentionally breaking in and setting fire to an organization that somebody disagreed with,” he said.

D.C. – whose first name is Denise – went public about the very real threats on Sunday.

“These threats aren’t lame Twitter threats,” she wrote. “They are threats outside of Twitter, stating they know where I live.”

They included “threats of rape and strangling.”

“Due to threats against my life, my family is asking that I stay off social media until the situation is resolved,” she continued.

I have worked with the police. My home is now on police watch. https://t.co/iPkpHlds8t

If someone yelled, “F— Obama” before trying to stab a Democratic candidate or shoot his followers, torched a Democratic Party office, or threatened to rape a Democrat Senate staffer or a liberal blogger, the media coverage would never end – and I don’t mean if they happened together.

Any one of them would get wall-to-wall media coverage – much less 5 in a week.

The Democrats have accused Trump of being Hitler, said Republicans are putting people in concentration camps, and taught young people that anyone who disagrees with them should be shouted down, shut up, or beaten to a pulp.

Democratic officials need to rein in their explosive, over-the-top rhetoric before Scalise has to repeat his warning during a eulogy.