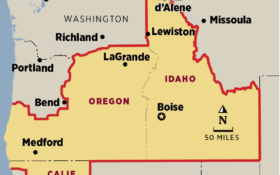 “This election proves that rural Oregon wants out of Oregon. If Oregon really believes in liberal values such as self-determination, the Legislature won’t hold our counties captive against our will,” said Mike McCarter, president of Citizens for Greater Idaho.

According to the group, the election turnout was 43 percent of eligible voters — far above the average of 25 percent. Support varied, from as 54 percent in Malheur County to as high 74 percent in Lake County.

“Sherman County voted for a ballot initiative that makes county commissioners responsible for promoting ‘the interests of the County in the relocation of Idaho state borders,’” the group said.

The other four “voted for a ballot initiative that requires county commissioners to meet periodically to ‘discuss how to promote the interests of [the county] in any negotiations regarding relocations of Idaho state borders.”

The group hopes political pressure from county initiative votes will lead to negotiations between Oregon and Idaho to move the border, putting up to 22 of Oregon’s 36 counties in Idaho.

The chances of those counties joining Idaho are very slim, however. The move would require approval from both Oregon and Idaho legislatures and the U.S. Congress.