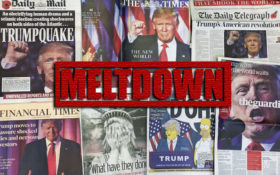 New Year’s is a time when people look back—but the Fake News media would rather nobody remember these phony stories from 2019. Here are the worst examples of media lies, spin, and left-wing bias over the last year:

The story was too perfect for the media to resist: A bunch of white, Christian kids from Kentucky who were wearing MAGA hats allegedly harassed an American Indian activist at a march for indigenous rights. The video showed them “surround” him and laugh while making tomahawk chops.

Here was living, breathing proof of everything Hillary Clinton said about the “deplorables”!

The media turned it into a racist extravaganza. Former CNN host Reza Aslan asked, “Have ever seen a more punchable face than this kid’s?”

Honest question. Have you ever seen a more punchable face than this kid’s? pic.twitter.com/jolQ7BZQPD

The media ginned up so much hatred that people threatened to blow up the kids’ school.

Then the internet showed footage that cleared the students—and exposed the media as baldfaced liars.

The Covington kids were victims of racism from the Black Hebrew Israelites, and left-wing radical Nathan Phillips ran over and started beating his drum a few inches from 17-year-old Nick Sandmann’s face, almost hitting the teenage boy with his mallet.

But even after the truth came out, The Washington Post whined that “the Trump Internet pounced” on their lies. CNN’s Chris Cuomo said it was Sandmann, not Phillipps, who turned the event “into a standoff.” And Cuomo called the Covington kids “victims of their own choices.”

Maybe the worst part is that the kids’ Catholic diocese piled on, telling reporters, “We condemn the actions of the Covington high school students,” and administrators would take action “up to and including expulsion.” This time, the media and the church joined hands to bear false witness.

Barely a week after their humiliation over the Covington kids, the media needed something to get their mojo back—and Jussie Smollett delivered.

The “Empire” star claimed he’d been beaten, bleached white, and almost lynched in Chicago by people wearing Trump hats who shouted, “This is MAGA country!”

Police soon learned the actor had paid two brothers from Nigeria to stage the “attack.” He hoped it would get his career back on track.

Detectives found the signed check for $3,500 he cut to the brothers, who said they had “tremendous regret” forever getting involved in the plot.

Smollett was charged with lying to police—but the Democratic machinery of Chicago dropped the charges…and Smollett still claims his story was “truthful” to this day.

The Washington Post “fact-checkers” claimed President Trump told 10,000 lies as of the middle of this year. They’ve since inflated that to more than 15,000.

But the reporters are the ones lying, according to Steve Goldstein of Marketwatch, who sorted through the report’s economics section.

For instance, some of their “untruths” included President Trump accurately stating the pages of federal regulations his administration has cut or the number of jobs created since his election.

Goldstein said the report is at least 25-30 percent phony—and that’s just the one section he reviewed.

The media “have reflexive bias toward declaring Trump comments as untrue,” Goldstein said.

The president’s political opponents will say or do almost anything—but they stooped to a new low in 2019 by demanding that President Trump be shot for betraying his country.

Trump’s Republican primary challenger (yes, he has one), ex-Massachusetts Governor Bill Weld said Donald Trump’s actions with Ukraine are nothing less than “treason pure and simple, and the penalty for treason under the U.S. code is death,” he told MSNBC’s Joe Scarborough. “That’s the only penalty.”

Instead of pushing back about whether it’s “treason” to cut off foreign aid to Ukraine, NBC ran a “news” piece asking, “Did Donald Trump commit treason?”

Even the British paper The Independent quoted a professor’s opinion that Trump had committed treason at least “four ways.”

In his phone call with Ukrainian President Volodomyr Zelensky last summer, Trump used the words “I would like you to do us a favor.” He mentioned Joe Biden’s corrupt son, Hunter, and his sweetheart job with a Ukrainian oil company—about 500 words later. The favor was finding the hacked DNC server.

But Adam Schiff turned that into the president demanding, “I want you to dig up dirt on my political opponent, understand? Lots of it.”  The Democrats built that up into an impeachable offense—and the media covered it like it was anything except the creation of a left-wing lie factory. As Will Ferrell said in Elf, “You sit on a throne of lies.”

These are just a few examples of media bias, the worst-of-the-worst. And they have a few things in common: They all help the Democrats and their liberal, anti-American agenda. They make Trump look bad. And they show that, deep down, the media really hate people like you.

Make your New Year’s resolution to read more of The Horn News in 2020. We’ll keep giving you the straight scoop in the year to come.