49ers cheerleader did WHAT during anthem!? - The Horn News 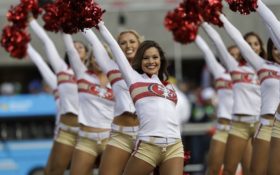 A cheerleader for the 49ers football team sparked nationwide outrage after she took a knee during the National Anthem on Thursday night.

The NFL has already struggled with diminished attendance numbers and lagging television ratings when players stirred controversy last year. Now, even the cheerleaders are spitting on America’s honor.

Ahead of the team’s game versus the Oakland Raiders, the cheerleader’s photo went viral after several football fans snapped photos of the incident at the California stadium.

One spectator took a closeup of the cheerleader —

The photo has gotten over 4,000 likes on Twitter since Thursday evening.

One of the Niners cheerleaders is taking a knee. pic.twitter.com/DW5SJqh9zj

In 2016, former 49ers quarterback Colin Kaepernick first sparked outrage when he took a knee during the National Anthem.

In August, The Horn News reported that President Donald Trump lashed out at NFL kneelers saying, “most of them are unable to define” what they’re even demonstrating against — and instead told players they should “Be happy, be cool!”

That advice should now be extended to the NFL cheerleaders, too.