Is THIS a miracle... or a danger to America? - The Horn News 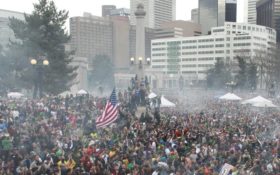 Marijuana users’ self-proclaimed holiday is linked with a slight increase in fatal U.S. car crashes, an analysis of 25 years of data found.

The study lacks evidence on whether pot was involved in any of the April 20 crashes, but marijuana can impair driving ability. Previous studies have shown that many pot-using motorists drive after partaking and think it’s safe to do so.

It begs the question: Is pot a miracle medicine… or a danger to America?

Deaths increased slightly in most but not all states, amounting to an overall increased risk of 12 percent — or an extra 142 driver deaths linked with the 4/20 holiday, said lead author Dr. John Staples at the University of British Columbia.

Other studies have found a similarly elevated risk linked with alcohol and driving on Super Bowl Sunday and New Year’s Eve.

Most accidents had no police data on drug testing so there’s no way to confirm that marijuana was involved, but researchers think the drug was responsible for some crashes.

The study was published Monday in JAMA Internal Medicine.

“It’s a really relevant question to be thinking about now since legalization seems to be progressing across the United States and in Canada,” Staples said.

Marijuana is legal for medical use in most U.S. states and in Canada; recreational use has been legalized in nine states plus Washington, D.C. and is expected to become legal in Canada in July.

According to the National Institute on Drug Abuse, marijuana can impair driving ability. However, the U.S. agency also notes that directly linking marijuana with car crashes can be difficult because it’s often used while drinking alcohol.

What are your thoughts? Is pot a dangerous drug… or medicine that has to be used carefully?

Vote in this urgent poll —

Should marijuana be used as medicine?