Dow's drop: What does this mean? - The Horn News 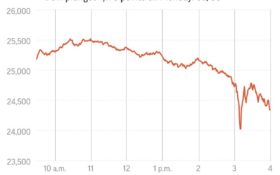 The long, smooth, record-setting ride on Wall Street is over. The stock market pullback that experts had been predicting finally came Monday.

A rapid, computer-generated sell-off Monday wiped out the market’s gains for the year. At one point, the Dow Jones industrial average dropped 1,000 points in less than an hour, and it ended with its worst day in more than six years. The Standard & Poor’s 500 is now down nearly 8 percent from its record high, set a little more than a week ago.

So what does this mean? Big headlines… and little else, according to experts. Market professionals warn that the selling could continue for a bit. But many are also quick to say they see no recession looming, and they expect the strengthening global economy and healthy corporate earnings to help stock prices recover.

“The reasons for the increase in rates is the stronger economy,” said Ernie Cecilia, chief investment officer at Bryn Mawr Trust. “The reasons are positive. It’s not as if something like 2008 or financial Armageddon is coming.”

The trigger for the sell-off came at the end of last week when a government report showed that wages across the country rose relatively quickly last month. While that’s good for workers, traders took it as a signal that higher inflation may be on the way, which could push the Federal Reserve to raise interest rates more quickly than expected.

The sell-off Monday was so steep that some market-watchers blamed automated trading systems. These systems are programmed to buy and sell based on programmed numbers, and they may have hit their sell triggers following the first wobble for stock prices after an unusually placid run.

That may mean even more volatility in the coming days, something that investors haven’t had to deal with during a blissful year-plus of record-setting returns. Before Monday, the S&P 500 index had gone a record period of time — roughly 400 trading days — without a drop of even 5 percent.

Monday was also the first day in office for the new chairman of the Federal Reserve, Jerome Powell, and investors are wondering how closely he will stick with the low interest-rate policies set by his predecessor, Janet Yellen.

Still, many market-watchers said they remain optimistic that stocks will recover.

Despite worries about interest rates, they still see a recession as a long shot. With economies growing around the world, profits for U.S. businesses are expected to continue rising, and stock prices tend to follow the path of corporate earnings over the long term.

“The rate worries have been the trigger” for the stock market’s swoon, said Melda Mergen, deputy global head of equities at Columbia Threadneedle. “But fundamentally, we don’t see any new news. It’s earnings season, the time that we get more direct feedback from our companies, and we don’t see any concerns.”

More than half the companies in the S&P 500 have told investors how they performed in the last three months of 2017, and most have topped analysts’ expectations, according to S&P Global Market Intelligence. Even more encouraging is that more than three quarters of them made more revenue than expected, which means it’s not just cost-cutting and layoffs that are allowing companies to earn more.

If the stock market does indeed bounce back, though, many market-watchers expect returns to be more muted than in prior years because prices have already climbed so high. The S&P 500 is up nearly 292 percent since bottoming in early 2009.

And investors should remember that drops like those of the past two days aren’t a unique occurrence for stocks. They’re inherently risky investments, and investors should be prepared to see drops of 10 percent. Such declines happen so regularly that analysts have a name for them: a market correction.