Chris Christie starts new career (no one expected THIS!) - The Horn News 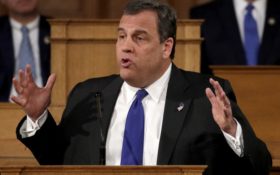 After a presidential run of his own, former New Jersey governor Chris Christie became a key player in President Donald Trump’s campaign.

After 8 years as the Garden State’s governor, Christie has began a new career as a contributor for ABC News’ “Good Morning America.”

During his first interview as an occasional contributor on the show, Christie warned that Trump should sit down face to face with special prosecutor Robert Mueller.

Christie, who served as the U.S. attorney for New Jersey before he was elected, says he doesn’t think there have been any credible allegations against Trump. But Christie says Mueller is not someone “to be trifled with.”

He also says that anyone who speculates about what Mueller may know is “throwing darts at the wall with a blindfold on.”

Christie believes there are many ways to cooperate with the investigation instead of holding an interview.

“I don’t think the president of the United States, unless there are credible allegations which I don’t believe there are, should be sitting across from a special counsel. The presidency is different. I don’t think they should do that,” he said.

As a once rising star in the Republican party, Christie ended his two-terms with a low approval rating. He was succeeded after eight years in office on Jan. 16 by Democratic Gov. Phil Murphy.

Christie is the latest conservative commentator to join the network, along with Meghan McCain and Alex Castellanos.