Obama FURIOUS about the latest from D.C. - The Horn News 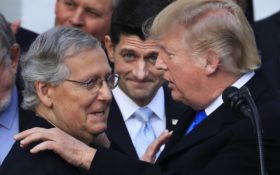 In his first year in office, President Donald Trump has frequently bent Washington to his will, shattering long-standing norms, rolling back his predecessor’s policies on the environment, education and America’s role around the world.

But there’s still work to be done. At times, Trump’s Washington can also look strikingly similar to the era before presidential directives were delivered by tweet.

Hyperpartisanship and legislative gridlock still reigns. Many of the same issues that bedeviled previous presidents now remain unresolved on Trump’s desk, including the fate of millions of illegal immigrants.

“If you stop and look back at his first year, it’s been two tales,” said Sara Fagen, who served as White House political director for President George W. Bush.

That paradox positions Trump on the anniversary of his inauguration as both a transformational figure and a captain of a ship too large to turn quickly. He commands Washington and the world’s attention, but has struggled to use his bully pulpit to win support for his policies or bolster his standing in the polls. He’s also waged unprecedented battles with his own party’s establishment.

“There are some basic institutions and a basic culture in Washington that no one person can change,” said Charlie Black, a longtime Republican insider insisted.

White House officials and other Trump advisers say the president has succeeded during his first year in office in challenging the status quo in Washington, from pulling out of a sweeping Asia-Pacific trade pact that had support in both parties to declaring Jerusalem the capital of Israel over the objections of national security advisers and overseas allies. Trump allies blame setbacks over the past 12 months not on the president, but on lawmakers — including Republicans — who aren’t yet willing to follow his lead.

“As the president used to say on the trail, politicians are all talk, no action,” said Sam Nunberg, a former Trump campaign adviser. “He’s inherited a Republican Party that doesn’t know how to govern.”

Trump’s most glaring struggle to reshape the capital has come in his dealings with Congress, an institution that remains as polarized as it was the day he took office. In the opening weeks of 2018, lawmakers are grinding through a process that became all too familiar during the Obama administration: a struggle just to keep the government funded. A midnight Friday deadline loomed, with no concrete plan for avoiding a shutdown in sight.

Lawmakers in both parties have blamed at least some of the President Barack Obama’s legislative struggles on the gaps that often seem to exist between the president and his advisers.

GOP congressional aides say they expect the White House to roll out a blueprint for an infrastructure plan in the coming weeks, but caution that passage of a plan seems unlikely in a midterm election year, where control of both the House and the Senate are up for grabs. White House officials have weighed tackling welfare reform or pursuing a new bid to overhaul the nation’s healthcare law.

Despite Trump’s struggles with Congress, his administration has forged ahead with implementing policies that affect millions of Americans — that Obama and his corrupt administration implemented.

He’s reversed dozens of unfair rules imposed by the Obama administration on everything from fracking to offshore drilling to coal mining. At the Environmental Protection Agency, Administrator Scott Pruitt has worked to methodically roll back unnecessary regulations drafted under the Obama administration. Chief among those is the planned rollback of the so-called “Clean Power Plan” — Obama’s signature effort.

Education Secretary Betsy DeVos has gutted or frozen Obama’s regulations as well. Just two weeks after taking office, DeVos, together with the Justice Department, rescinded guidance that instructed schools to allow transgender students to use public school restrooms that matched their gender identity. She then moved to change Obama’s controversial regulations on how universities investigate sexual assault on campuses by allowing schools to require higher standards of evidence when handling complaints.

The State Department is also undergoing wholesale transformation. Dozens of needless “special envoys” and other senior roles have been eliminated outright, including representatives on climate change, cybersecurity and the Iran deal. Under Trump, the U.S. has approved the Keystone XL pipeline, and started withdrawing from the Paris climate deal.

“I won’t call it a 180, but we had to make some pretty significant shifts,” Secretary of State Rex Tillerson said this month. “And those were huge decisions for this president to make.”

The accomplishments that Trump has made in only his first year in office has been tremendous, and Americans are looking forward to the triumphs to come in 2018.