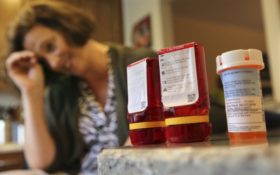 You probably know by now that cholesterol isn’t quite the bogeyman that mainstream medicine makes it out to be. In fact, cholesterol plays some critical roles in your body. For example, it transports fat-soluble nutrients, supports your immune system and it can even help boost your brainpower.

And driving your numbers too low, as can happen with statin drugs, can actually harm your health. It can compromise your immune system and possibly raise your risk for cancer. This may be especially true for seniors.

In a large analysis of 19 studies, researchers found that in 80 percent of the cases the seniors with higher cholesterol levels outlived the folks with lower numbers. In other words, you shouldn’t be shooting for basement low numbers, but rather maintaining a healthy balance.

The result is heart disease, heart attacks and strokes.

Skip the statins and go drug-free instead

If you’re concerned about your cholesterol creeping up and out of the healthy zone, but you don’t want to risk dangerous statin side effects, there are natural options.

These four drug-free cholesterol cures can help you get your numbers back into balance without the meds.

Research has revealed that curcumin, the active ingredient in the spice turmeric, can help lower LDL (“bad”) cholesterol, preventing oxidation and suppressing the buildup of plaque in your arteries.

In one study, volunteer’s LDL levels plummeted 33 percent after taking 500 mg of curcumin for a week. Their total cholesterol dropped almost 12 points and their HDL (“good”) cholesterol climbed an impressive 29 percent.

In another study, a low dose of curcumin, 45 mg a day, reduced LDL and total cholesterol levels in patients with acute coronary syndrome, according to research published in the Indonesian Journal of Medicine.

Dark chocolate is brimming with oxidation battling antioxidants, which give this delicious treat its heart protective powers.

In one study, cocoa powder was shown to lead to a significant drop in oxidized LDL levels in a group of guys with high cholesterol. In addition, the chocolate reduced their overall LDL levels and increased their HDL, according to the study published in the Journal of Nutrition.

Punicic acid, the main fatty acid found in pomegranates, is responsible for most of the delicious fruit’s heart benefits. In one study, a group of folks suffering from both type 2 diabetes and high cholesterol saw substantial improvements in their LDL cholesterol levels when taking pomegranate juice.

In another four week, double-blind, placebo-controlled study 800 mg of pomegranate seed oil a day significantly reduced triglyceride levels, improving the ratio between triglycerides and HDL levels in the volunteers who all suffered from  high cholesterol.

And several studies have found that pomegranate juice has a protective effect on LDL cholesterol, keeping it from oxidizing and becoming dangerous for your heart.

This article was originally posted on Healthier Talk