ESPN host SLAPPED DOWN over this comment - The Horn News 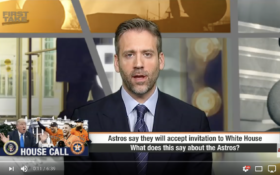 In response to the World Series champion Houston Astros accepting President Donald Trump’s invitation to the White House, Kellerman lost it and yelled.

But, Kellerman was not ready for what came next — ESPN conservative contributor Will Cain blasted him for his ignorant statement.

Kellerman stated that the Astros visiting the White House makes the team “on the wrong side of history.”

He tried to claim that his remarks had “nothing to do with politics”… but we all know what he is truly angry about.

Kellerman does not believe that the Trump administration deserves to be treated “normal” because “all the President’s men seem to be implicated.” Seems he’s been watching too much CNN.

Cain destroyed Kellerman’s uninformed opinion with some cold, hard truth: “I don’t believe [your statement] has nothing to do with your politics.”

This ESPN host is simply turning a celebratory visit into a political event, because a conservative is in office? If Hillary were in office, clearly  his reaction would be different.

Cain also read off a quote from Astros World Series MVP George Springer: “In our country it stands for a lot, it means a lot to a lot of people. I’ve been there, my grandfather worked in Washington for years. If the team goes, I’m going!”

It is clear that for some people, their whole world revolves around hatred and disdain for Trump and his family.

Even a trip to the White House as a message of unity and tradition between a champion team is up for attack… on a sports network!?

Liberals like Kellerman have allowed politics to consume their lives too much.