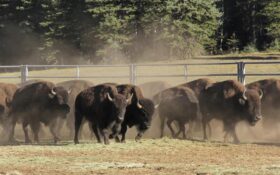 More than 45,000 people are vying for one of a dozen spots to help thin a herd of bison at Grand Canyon National Park.

The odds aren’t as good as drawing a state tag to hunt the massive animals beyond the boundaries of the Grand Canyon, but they’re far better than getting struck by lightning or winning the Powerball.

“Just keeping my fingers crossed that I’m one out of 12,” said Rich Dawley Jr. a 29-year-old farmer outside of Gettysburg, Pennsylvania who applied. “You can’t win unless you play.”

The National Park Service opened a rare opportunity for skilled shooters to kill bison at the Grand Canyon’s North Rim where officials say they’ve been trampling on archaeological and other resources, and spoiling the water.

Potential volunteers had 48 hours — until midnight Tuesday — to apply. The opportunity drew 45,040 applicants, about 15% of which were Arizona residents. About one-third of the applicants were from Texas, California, Colorado and Utah, said Larry Phoenix, a regional supervisor for the Arizona Game and Fish Department.

The department will select 25 names through a lottery, vet them and forward finalists to the park service. The first 12 who to submit a packet of information requested by the park service will be part of the volunteer program in the fall, Grand Canyon spokeswoman Kaitlyn Thomas said Wednesday.

The volunteers who are selected will find out May 17.

The work is expecting to be grueling, done on foot at elevations of 8,000 feet (2,438 meters) or higher at the Grand Canyon’s North Rim. Volunteers can’t use motorized transportation or stock animals to retrieve the bison that can weigh up to 2,000 pounds (907 kilograms) and will have to field dress them with help from a support crew. Snow could also be a factor.

None of that deterred James Vasko from applying. He joked that he had great odds and already planned to bring the best man from his wedding along for the trip.

“I just thought it would be a cool experience,” said Vasko, a 27-year-old who works in real estate and farms in Omaha, Nebraska. “I’m an avid fisher, hunter. Going to Grand Canyon to hunt bison would be absolutely awesome.”

Park officials are clear that it’s not a hunt because it doesn’t involve fair chase. Hunting is prohibited within national parks, but the agency has authority to kill animals that harm resources, using park staff or volunteers.

Matt Mallery, an archaeologist in Flagstaff who applied, said using volunteers is cost-effective, logical and provides an opportunity to harvest organic meat that can be cost-prohibitive through the state hunt. Removing bison also helps keep the ecosystem in check, he said.

“It needs to happen for management purposes,” said Mallery, 49. “And if it’s going to be somebody, it may as well be me.”

The park released a plan in September 2017 after an environmental review that called for a mix of corralling the animals near the highway that leads to the North Rim and relocating them, and for skilled volunteers to shoot. The park has removed about 90 animals so far and transported them to Native American tribes.

Killing bison won’t decrease the herd by much. Each volunteer can take one animal out of the 300-500 estimated to be roaming the far northern reaches of Arizona. The goal population is 200.