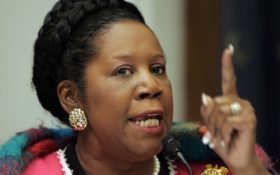 Representatives are elected to serve for the people… but Texas’ Congresswoman Sheila Jackson Lee sees herself as a queen to her ‘servants’.

That’s not hyperbole. Those are literally Jackson Lee’s own words — and this Democrats abuse of power extends to special treatment from her staff, airlines, and private companies.

In fact, Jackson Lee’s office has the highest employee turnover rate in Washington… a fact that does not come as a surprise to anyone.

If anyone dares call out her obnoxious behavior, though, Jackson Lee has an old stand-by: The race card.

Jackson Lee’s most recent scandal occurred on a United Airlines flight this week.

A schoolteacher named Jean-Marie Simon claims she booked herself a first class seat on a United Airlines flight… but when she went to board, she was told that she was being bumped down to the economy section. As she was walking onto the plane, who does she see sitting in her seat?

If it isn’t the Jackson Lee herself!

Sheila Jackson Lee (D-Texas) in seat 1A the one I paid for dearly, and the one United gave to her without my consent or knowledge! Fellow congressman on same flight said she does it repeatedly. @united pic.twitter.com/Q2c6u6B0Yp

In a post on Facebook, Simon wrote that she spoke with an unnamed congressman on the plane. She said that he stated, “‘You know what happened, right? Do you know who’s in your seat?’ I said no. He told me that it was Jackson Lee, a fellow U.S. congresswoman who regularly does this, that this was the third time he personally had watched her bump a passenger.”

Jackson Lee issued a half-hearted apology — and then claimed  she was targeted because of her race.

I noted that this individual came toward me and took a picture. I heard later that she might have said “I know who she is.” Since this was not any fault of mine, the way the individual continued to act appeared to be, upon reflection, because I was an African American woman,

Critics say this isn’t the first time Jackson Lee has pulled these shenanigans.

According to her former staffers, this woman believes that everyone should wait on her like royalty.

“I am a queen, and I demand to be treated like a queen,” Jackson Lee once said to her staff.

That’s only the beginning. Multiple former employees claim to have experienced repeated mental abuse from her that defies explanation.

“Strangers may say, ‘oh I know what you’ve been through.’ No, you really don’t. Because until you’ve experienced it… People don’t tell the worst of the stories, because they’re really unbelievable,” said one former employee of Jackson Lee’s.

To the Democrats, the constitutions promise to be a government “For the people, by the people” are just empty words.

To Jackson Lee, it’s FROM the people… for her!