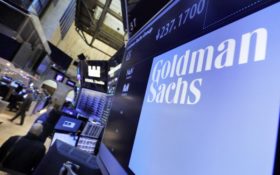 Wall Street giant Goldman Sachs plans to bring back $5 billion in U.S. cash from overseas bank accounts this fourth quarter — thanks to the tax overhaul signed into law last week.

The New York bank on Friday became one of the first to release details on how changes in the tax code will affect how money parked overseas is handled.

Goldman Sachs will be voluntarily bringing in the billions of dollars from tax shelters and allow it to be taxed — and will put the money straight back into the American economy.

Goldman, which releases fourth-quarter and annual results in mid-January, had profits of $2.35 billion in the fourth quarter of 2016, and annual profits of $7.4 billion. Their total revenue last year was $30.61 billion.

For decades, Wall Street bankers and other U.S. companies have used tax loopholes to legally park money overseas to avoid paying U.S. corporate tax. It has been expected that changes in the law would prompt some of those companies to return money to the U.S., potentially $2.5 trillion or more.

The tax measure signed into law by President Donald Trump this month spreads benefits across a wide array of American industry, including banks.

Under former President Barack Obama’s watch, finance and insurance companies would have paid an effective corporate tax rate of 26.1 percent next year. Now, it will be 14.3 percent…. and they’re finally willing to pay. Analysts at Goldman Sachs have estimated that the tax law will boost big-bank earnings per share by 13 percent next year. The top beneficiary will be Wells Fargo, which will enjoy an 18 percent earnings surge in 2018, Goldman estimates.

In other words, the overall economy will be affected positively, making this major change good for taxpayers.

These billions of dollars that were sitting overseas untouched will instead be invested and used on paying salaries — and they’ll also be taxed, helping reduce the government deficit.

Thanks to Trump, companies like Goldman Sachs feel confident in returning their loads of cash to the U.S. and put it back into our economy.

The tax change for Goldman Sachs was revealed in a filing with the U.S. Securities and Exchange Commission early on Friday.

For all of those liberals that doubted the positive change that the tax overhaul will bring, here is your proof.

And now it is time for them all to thank Trump!