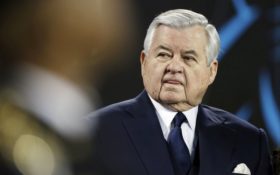 Facing a growing investigation that accuses him of sexual misconduct and using racist language at work, Carolina Panthers owner Jerry Richardson announced Sunday that he will sell the NFL team after the season.

Rappers and MBA players alike are now chomping at the bit to purchase the team.

Their first player they’d sign if they do buy the team would be disgraced former 49ers quarterback Colin Kaepernick.

The team announced on Twitter that Richardson is selling the team, linking to a five-paragraph letter by the franchise’s only owner.

Jerry Richardson will put Carolina Panthers up for sale https://t.co/jvPW3GRAAi

“I believe it is time to turn the franchise over to new ownership,” Richardson wrote, saying he wouldn’t begin discussions until after the season. The Panthers, who lost in the Super Bowl two seasons ago, are in playoff position again.

“I hope everyone in the organization, both on and off the field, will be firmly focused on one mission: to play and win the Super Bowl,” said Richardson, 81.

Richardson’s letter did not directly address the investigation or allegations against him.

The NFL awarded Richardson, a former player with the Baltimore Colts, an expansion franchise in 1993, and he has been the team’s only owner.

“There has been no greater mission or purpose in my life than to have brought an NFL franchise to Charlotte,” Richardson wrote. “The obstacles back then were significant and some even questioned whether or community could or would support professional football. But I always knew that if given the chance the Carolina would rise to the occasion. And you have.”

“While I will no longer be the team owner, I will always be the Panthers Number One fan,” Richardson’s letter said.

The NFL had no comment on the upcoming sale of the Panthers.

But, rapper Sean “Diddy” Combs did have something to say.

I would like to buy the @Panthers. Spread the word. Retweet!

Combs later repeated his interest in buying the team and pledged that he would sign Kaepernick.

Along with signing Kaepernick, Combs has one others mission–to improve the halftime shows.

“I will have the best halftime show, the best selection of music,” he said. “And we will win Super Bowl after Super Bowl.”

Forbes estimates the Panthers worth at $2.3 billion.

And despite Combs’ desires, he will have troubles purchasing the team. The team is worth a whopping $120 million more than Combs ‘ total net value.

Looks like the rapper is going to have a tough time “making history” and signing disrespectful Kaepernick back into the league.