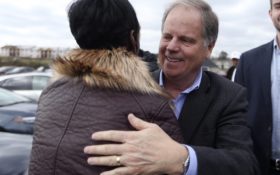 A stunning video has emerged from Alabama and has begun circulating social media — and the creator says it’s “smoking gun proof” that there was widespread voter fraud in the Alabama senatorial election on Tuesday.

The video, shared on a forum for President Donald Trump’s supporters by user BreakfastGolum, is taking social media by storm.

If true, the contents are shocking.

Caught up in the excitement of Doug Jones’ victory over Judge Roy Moore, a man at a Jones victory party seems to admit to a local reporter that many Jones supporters came from non-Alabama states to vote illegally.

Speaking to a Fox10 reporter, the man holds up a Jones for Senate sign and cheers loudly.

“We came from different parts of the country, as part of a fellowship, and all of us pitched in to vote and canvass together — and we got our boy elected! Let’s go, Doug Jones!” the man exclaims.

The video adds fuel to the rampant speculation that Alabama’s special election was rigged.

Observers have noted that in some heavily-Democratic districts, voter turnout was 300% higher than historic averages. Leading up the election, liberal leaders had complained that Republican voter ID laws would suppress voter turnout.

The overwhelming turnout led critics to point out that either voter ID laws don’t suppress voter turnout — or there was widespread fraud in the Alabama election. Or, perhaps both.

Despite the speculation that fraud was committed, a Tuesday decision by attorney’s for Alabama’s Secretary of State to allow the physical destruction of paper ballots makes the claims hard to prove.

The zero-hour decision to destroy the ballots was controversial in the state. The Monday ruling overturned a Montgomery Circuit Court Judge order over the weekend that ballots should be preserved, and critics loudly objected that the  overturned order was irreversible and could fuel controversy.

It seems they were right. Immediately following the election claims of voter fraud spread like wildfire on social media.

Watch the video and decide for yourself.

Then, vote in our poll below and let us know your thoughts: Was the Alabama special election rigged?

Was the Alabama special election rigged?