This Halloween parade went to the dogs - The Horn News 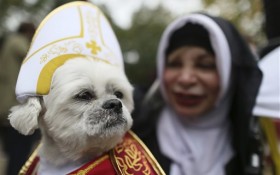 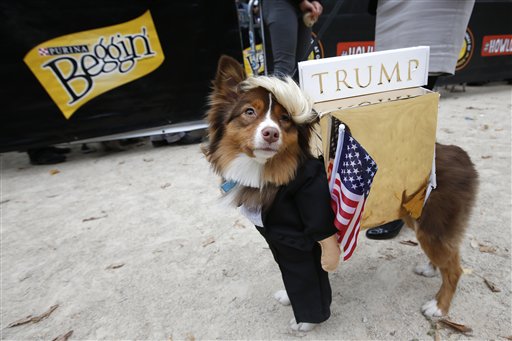 A park went to the dogs in a grand way on Saturday, hosting what was billed as the nation’s largest Halloween dog parade, with hundreds of canines submitting to their owners’ fanciful desires to see them in costumes as superheroes, dinosaurs and the pope.

Thousands of spectators lapped it up, mingling with nearly 300 four-legged contestants around a stage in Manhattan’s Tompkins Square Park. Every imaginable breed was paraded one by one to preen before judges in the hopes of a Best in Show award at the 25th annual outing, which raises money for the park’s dog run.

The prize was won by some Dallas contestants who tapped into the Halloween spirit with a Day of the Dead-themed presentation that included two Chihuahuas and a Yorkshire terrier. Last year, a doggy version of Rose and Jack from the movie “Titanic” captured the title.

This year, there were all types of dinosaurs, perhaps capitalizing on the excitement generated by the recent release of the “Jurassic World” film, and dogs posing as an alligator, a dragon, a fisherman and characters from “The Wizard of Oz” and “The Flintstones.” One dog, accompanied by a woman wearing a nun’s habit, was dressed as Pope Francis.

Some dogs’ costumes were outdone only by those of their owners. 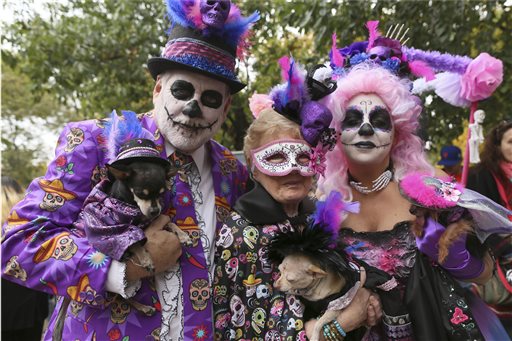 Bronx resident Andrea Pagan was decked out as Wonder Woman, just like her Boston terrier guide dog, Imani, who is a bit of a hero in real life, protecting Pagan from potential accidents resulting from disabilities.

Spectator Danielle Williams, who’s from Port Chester, walked excitedly by dozens of colorfully costumed dogs and said she wanted to pet them all.

“I want to scoop them and love them,” she said.

Not only were the more than 275 participating dogs not barking up the wrong tree in the park surrounded by dog lovers, they mostly weren’t barking at all, no surprise to Krzywicki, who watched Daisy Mae shy away from the affection of strangers. He suggested stage fright had set in.

“She’s pretending she doesn’t know me,” Krzywicki said. “She’s saying, ‘Help! Somebody adopt me! Look what he made me do!'”