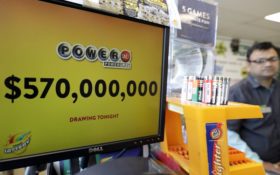 The winning ticket was purchased at a Circle K in the city of Glendale, Arizona Lottery spokesman John Gilleland said Wednesday.

The jackpot can be paid out as an an annuity with 30 annual payments or is worth $316.8 million if collected in a lump-sum, Gilleland said.

Under a 2019 Arizona law, the winner can remain anonymous forever, Gilleland said.

“We may never be able to release the identity,” he said.

The law specifies that winners of Arizona Lottery prizes of $100,000 or more automatically remain anonymous for 90 days but the winners can choose to remain anonymous permanently. The option for permanent anonymity was adopted last year.

“Every single person that has won that sort of money has opted for that,” Gilleland said.