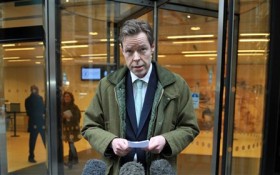 More than 40 years after a British aristocrat disappeared without trace in the hours after his children’s nanny was bludgeoned to death and his wife was badly beaten, he was officially declared dead Wednesday, allowing his son to take his title.

The story of Lord Lucan is one of Britain’s longest-running mysteries and has attracted tabloid attention for decades. While sightings of him have been reported all over the world, he has never been tracked down, and his name has become a byword in Britain for something cannot be found.

Wednesday’s ruling that Richard John Bingham, the Seventh Earl of Lucan, can be listed as dead, had been sought by the missing man’s son. George Bingham now has the legal right to his late father’s title and has immediately fashioned himself the Eighth Earl of Lucan.

“I am very happy with the judgment of the court in this matter,” said Bingham. “It has been a very long time coming.”

Lucan vanished after nanny Sandra Rivett was found dead at the family’s London home on Nov. 7, 1974. Lucan’s wife, Veronica, was hit in the head repeatedly when she ran downstairs to investigate, but she survived. Lucan’s bloodstained car was later found abandoned near England’s south coast.

In 1975, an inquest jury declared him Rivett’s killer. Detectives believe the aristocrat — a habitual gambler nicknamed “Lucky Lucan” — intended to murder his wife, but killed the nanny by mistake.

The disappearance of Lucan has continued to fascinate Britons and cause endless media speculation.

Many believe he drowned himself in the English Channel soon after the killing, but no human remains were ever found. Over the years there have been scores of reported sightings of Lucan around the world.

His son said his family does not know what really happened.

“It is a mystery, and it may well remain that way forever. I would ask, with a very quiet voice, for everyone to consider a person did die here in terrible circumstances, and a family lost a father.”

He called the slain Rivett a “lovely lady” and expressed sympathy toward her son, Neil Berriman.

Berriman said outside the court he is pleased that the ruling will provide “closure” for the new earl but said he is not willing to accept that the case is finished. He said new evidence will surface in the next few years and possibly solve the mystery.

“There is no getting away from the fact that whatever happened that night, Lord Lucan is guilty of something in my eyes,” he said.

Asked what he thought had happened, Berriman said: “He escaped.”