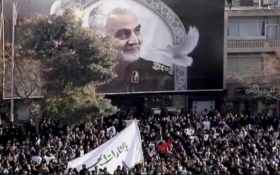 The stampede took place in Kerman, the hometown of Revolutionary Guard Gen. Qassem Soleimani, as the procession got underway, said the Fars and ISNA news agencies, citing Pirhossein Koulivand, the head of Iran’s emergency medical services.

There was no information as to what had set off the stampede. Initial videos posted online showed people lying lifeless on a road and others shouting and trying to help them. Soleimani’s funeral was later delayed but no new timing was given.

“Unfortunately as a result of the stampede, some of our compatriots have been injured and some have been killed during the funeral processions,” he earlier said. In delaying Soleimani’s burial, authorities cited concerns about the massive crowd that had gathered, the semi-official ISNA news agency said.

A procession in Tehran on Monday reportedly drew over 1 million people in the Iranian capital, but critics were quick to point out that the Tehran crowd was likely inflated by authorities.

Soleimani’s death has sparked calls across Iran for revenge against America for a slaying that’s drastically raised tensions across the Middle East. The U.S. government warned ships of an unspecified threat from Iran across all the Mideast’s waterways, crucial routes for global energy supplies. Meanwhile, the U.S. Air Force launched a drill with 52 fighter jets in Utah, just days after President Donald Trump threatened to hit 52 sites in Iran.

The U.S. blames Soleimani for the killing of hundreds of American troops in Iraq and accused him of plotting new attacks just before his death Friday in a drone strike near Baghdad’s airport. Soleimani also led forces in Syria backing dictator Bashar Assad in a long war, and he also served as the point man for Iranian-back terror groups in countries like Iraq, Lebanon, and Yemen.

The U.S. Maritime Administration warned Tuesday ships across the Mideast, citing the rising threats after the U.S. killed Soleimani. “The Iranian response to this action, if any, is unknown, but there remains the possibility of Iranian action against U.S. maritime interests in the region,” it said.

Oil tankers were targeted in mine attacks last year the U.S. blamed on Iran. Tehran also seized oil tankers around the crucial Strait of Hormuz, the narrow mouth of the Persian Gulf through which 20% of the world’s crude oil travels.

The U.S. Navy’s Bahrain-based 5th Fleet said it would work with shippers in the region to minimize any possible threat.

The 5th Fleet “has and will continue to provide advice to merchant shipping as appropriate regarding recommended security precautions in light of the heightened tensions and threats in the region,” 5th Fleet spokesman Cmdr. Joshua Frey told The Associated Press.

Meanwhile, Iranian Gen. Alireza Tabgsiri, the chief of the Guard’s navy, issued his own warning.

“Our message to the enemies is to leave the region,” Tabgsiri said, according to ISNA. The Guard routinely antagonizes the U.S. Navy in the Persian Gulf.